Following are some updated charts of economic data on Wichita. These charts may be useful to voters as they evaluate claims made by candidates for the upcoming election.

Here is a chart of Wichita general fund spending. Actual dollars along with dollars adjusted for inflation are shown. Figures beyond 2012 are estimates.

The following chart presents inflation-adjusted spending per person. Interestingly, this value has remained within a relatively small range for two decades. One interpretation of this chart is that the city is doing a good job keeping spending under control. But with the city cutting services and continually sending a message of budgetary distress, we might want to question something else.

Here is a chart of Wichita bonded debt.

Considering job growth, here is a chart comparing the number of private sector jobs in the U.S., Kansas, and Wichita. I’ve also presented Kansas jobs less Wichita jobs, so as to distinguish the State of Kansas from the City of Wichita. This data is indexed, with 1990 values set to 100, so that we can see relative growth. While Wichita more or less kept up during the 1990s, since then Wichita’s performance in creating jobs has fallen behind the nation and our state.

Comparing Wichita job growth by sector, we see that while government jobs have grown, the private sector lags behind.

When looking at the growth in gross domestic product, we again see that Wichita lags behind the state and nation, except in one area: growth of local government. Again, this data is indexed so that we can see relative changes. This data presents the Wichita MSA (metropolitan area), as that is the data the Bureau of Economic Analysis makes available. Wichita dominates the MSA, but these figures are not solely representative of the City of Wichita.

We’re also told that the city’s efforts to redevelop downtown Wichita are building up the tax base, and that many millions of dollars in the value of projects have been completed. But as the following chart shows, the assessed valuation of property in downtown Wichita is declining. 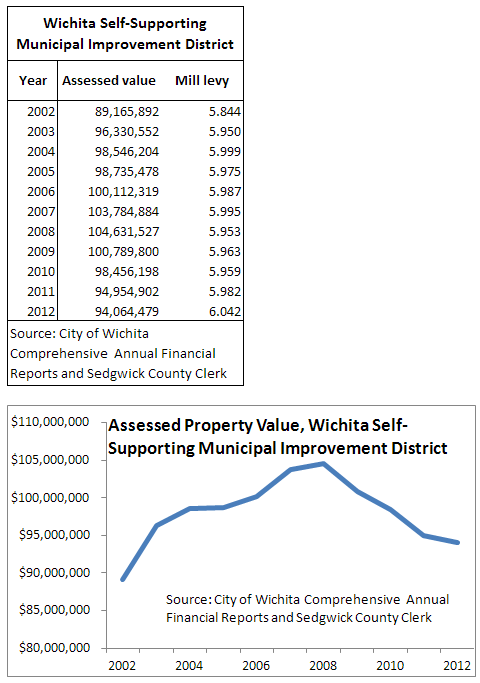