At a time when Wichita city hall needs to cultivate the trust of citizens, another incident illustrates the entrenched attitude of the city towards its citizens. Despite the proclamations of the mayor and manager, the city needs a change of attitude towards government transparency and citizens’ right to know.

At its May 20, 2014 meeting the Wichita City Council considered approval of a sublease by Shannon No. 2, LLC. The subject property had received subsidy from the city under an economic development program, which is why council approval of the sublease was required. I’ll cover the economics of the lease and its importance to public policy in another article. For now, the important issue is the attitude of the city towards government transparency and citizen participation.

In the agenda packet — that’s the detailed and often lengthy supplement to the council meeting agenda — some information regarding the Shannon lease was redacted, as you can see in the accompanying illustration. This piqued my interest, so I asked for the missing details.

The agenda packet is often made available Thursday afternoon, although sometimes it is delayed until Friday or even Monday. I sent an email message to the city’s chief information officer at 11:16 pm Thursday. After the message worked its way through several city departments, I received the information at 5:06 pm Monday. Since city council meetings are Tuesday morning, that left little time for research and contemplation.

This isn’t the first time citizens have been left with little information and even less time before council meetings. I was involved in an issue in 2008 where there was little time for citizens — council members, too — to absorb information before a council meeting. About this incident, former Wichita Eagle editorial board editor Randy Brown wrote this in a letter to the Eagle:

I’m fairly well acquainted with Bob Weeks, our extraconservative government watchdog. It’s fair to say that I agree with Weeks no more than one time in every 20 issues. But that one time is crucial to our democracy.

Weeks is dead-on target when he says that conducting the public’s business in secret causes citizens to lose respect for government officials and corrupts the process of democracy (“TIF public hearing was bait and switch,” Dec. 5 Opinion). And that’s what happened when significant 11th-hour changes to the already controversial and questionable tax-increment financing plan for the downtown arena neighborhood were sneaked onto the Wichita City Council’s Tuesday agenda, essentially under cover of Monday evening’s darkness.

This may not have been a technical violation of the Kansas Open Meetings Act, but it was an aggravated assault on its spirit. Among other transgressions, we had a mockery of the public hearing process rather than an open and transparent discussion of a contentious public issue. Randy Brown: Reopen Downtown Wichita Arena TIF Public Hearing 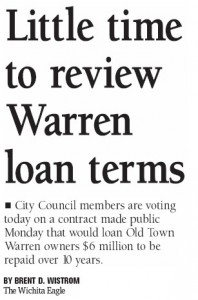 The Wichita officials involved in this matter were council members Jeff Longwell (district 5, west and northwest Wichita) and Lavonta Williams (district 1, northeast Wichita). Longwell’s behavior and attitude is part of a pattern, because in another incident in the same year the Wichita Eagle reported “Wichita City Council members and the public got a first look at the contracts that could send a $6 million loan to the owners of the Old Town Warren Theatre just hours before today’s scheduled vote on the matter.” (Little time to review Warren terms, July 1, 2008)

That article quoted council member Longwell thusly: “It’s unlikely many residents would read the full contract even if it had been made public earlier.” This attitude is common among Wichita elected officials and bureaucrats, in my experience. The city formally lobbies the Kansas Legislature opposing any expansion of the Kansas Open Records Act, for example.

The Shannon item was placed on the consent agenda. This is where items deemed to be non-controversial are voted on in bulk, perhaps two dozen or more at a time. Unless a council member asks to have an item “pulled” for discussion and a possible vote separate from the other consent items, there will be no discussion of any issues.

In 2012 there was an issue on the consent agenda that I felt deserved discussion. I researched and prepared an article at For Wichita’s Block 1 garage, public allocation is now zero parking spaces. At the council meeting, then-council member Michael O’Donnell (district 4, south and southwest Wichita) requested that I be able to present my findings to the council. But Mayor Carl Brewer and all five other city council members disagreed. They preferred to proceed as though the issue didn’t exist or was non-controversial. The message — the attitude — was that no time should be spent receiving information on the item. See For Wichita City Council, discussion is not wanted.

Wichita city officials, including Mayor Carl Brewer, say they are proud of the open and transparent city government they have created. But this episode, as well as others described in In Wichita, disdain for open records and government transparency, lets everyone know that transparency is dispensed, and accountability accepted, at the whim of the mayor, city council, and their bureaucratic enablers.

On his Facebook page, Clinton Coen wrote this about his city council representative James Clendenin (district 3, southeast and south Wichita) and this incident:

“I am once again ashamed of my City Councilman. Councilman Clendenin should have stood alongside his colleague, Councilman O’Donnel, and allowed a citizen to address his concerns on an agenda item. All Mr. Clendenin had to do was say “second” and Mr. Weeks could have addressed the council, provided that a majority of the council voted to allow it. Instead, Mr. Clendenin chose to censor someone that has a differing opinion. By bringing it to a vote, accountability would have been created, instead the remainder of the council chose to take the cowardly path.”

Why redacted in the first place?

As shown in the earlier illustration, the city redacted a large chunk of information from the agenda packet that it made available to the public. The city did — after some time — positively

respond to my request for the complete document. Which begs these questions: Why did the city feel that some information needed to be kept secret? Did city council members have access to the redacted information? Did any members of the public besides myself ask for the information? How many citizens might have been discouraged from asking by fear of the the hassle of asking city hall for information like this?

There’s also the consideration that the citizens of Wichita are parties to this transaction. How well these incentive programs work and what effect they have on the Wichita economy is an important matter of public policy. Without relatively complete information, citizens are not in a position to make judgments.

Often council members and bureaucrats complain that providing information to citizens is a financial burden to the city. But in this case, I’m sure the city would have been dollars ahead if it had simply published the complete lease in the agenda packet. My request bounced around several city offices — three that I know of — and I imagine that each handling of my request added cost.

The City of Wichita is proud to be an open and transparent governmental agency, its officials say. Wichita Mayor Carl Brewer often speaks in favor of government transparency. 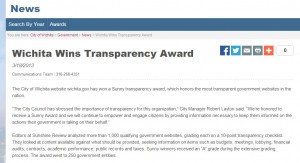 For example, in his State of the City address for 2011, he listed as an important goal for the city this: “And we must provide transparency in all that we do.” When the city received an award for transparency in 2013, a city news release quoted Wichita City Manager Robert Layton:

The incidents describe above, combined with others, demonstrate that it’s easy for officials to say they value transparency and accountability. The actual delivery, however, is difficult for our current leaders.

Despite the proclamations of the mayor and manager, the city needs a change of attitude towards government transparency. The incident described in this article is one more example of a divergence between the proclamations of city officials and their acts. It’s an attitude problem. All city hall has to do is get a new attitude.

For more on this topic, see A transparency agenda for Wichita.