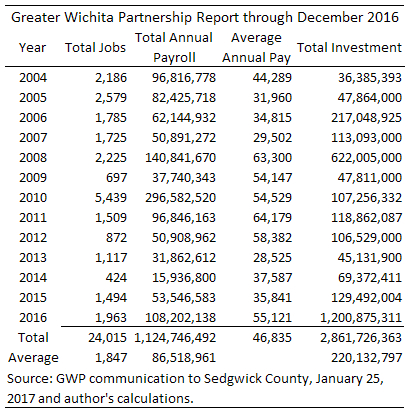 Greater Wichita Partnership is the organization with primary responsibility for economic development in the Wichita area. Data provided by GWP shows that since 2004, GWP takes credit for creating an average 1,847 jobs per year through its economic development efforts. 1

To determine whether this is an impressive amount, we need context.

So one level of context is that the jobs for which GWP credits itself amount to 1,847 of 295,785 jobs, or 0.6 percent of the number of people working.

Another way to look at this level of job creation is to consider it in relation to the number of hires. Over the past ten years, the national average monthly rate of hires is about 3.4 percent, meaning that each month 3.4 percent of jobs have a new person filling them, or the jobs are newly-created. With an average of 295,785 people working in the Wichita MSA each month, this means that about 10,057 jobs have a new worker, each month. That’s 120,684 per year. With GWP taking credit for 1,847 jobs, this means that GWP’s efforts are responsible for 1.5 percent of the new hires each year.

All this shows that the efforts of our economic development machinery are responsible for small proportions of the jobs we need to create. This assumes that the data regarding jobs and investment that GWP provides is correct.

Here’s one example of problems with the data GWP provides. GWP reported that companies made investments of $1.2 billion in 2016 when the average for years before that was $138 million. That looks like an impressive jump. This figure, however, contains over one billion dollars of investment by Spirit Aerosystems projected to occur over the next five years. Not in 2016, but possible over the next five years. Yet GWP presents this investment as through it occurred in 2016.

Furthermore, when Spirit asked the city for authority to issue $280 bonds over five years, it told the city this would result in 349 new jobs over the same time period. That’s creating jobs at the rate of 70 per year. These jobs are welcome, but we need thousands of jobs per year. 2

Does GWP deserve credit? GWP says, “We only incorporate data and dollar amounts from projects which we helped attract, retain or expand; we do not include announcements that we have not assisted with.” 3 “Helped” and “assisted” are not very precise. How much “help” did Spirit need to decide to remain in Wichita, except for hundreds of millions of dollars in forgiven taxes? That is something the people of Wichita pay for, not GWP.

We must also be concerned about the reliability of GWP statistics. Earlier this year GWP was prominently promoting on its website the success of NetApp, a technology company. The problem is that NetApp never met the job creation numbers GWP promoted, and in fact, had been downsizing its Wichita operations. 4

Still, GWP promoted NetApp as a success. An important question is, the NetApp jobs that were announced but never created: Are they included in the jobs and investment totals GWP provides? We don’t know, because GWP will not disclose the data used to build its report.

There are other instances of GWP’s predecessor, Greater Wichita Economic Development Coalition (GWEDC), promoting Wichita as home to companies that had closed their Wichita facilities, or were in the process of closing. 5

GWP also promotes this on its website: “Downtown Wichita is work central, boasting 26,000 daytime workers in the financial, healthcare, education, oil & gas and creative services industries.” This claim of 26,000 workers is based on blatant misuse and misrepresentation of U.S. Census data, and GWP leadership has known of this for several months. 6 Still, the use of incorrect data remains.

When the Wichita area offered incentives to a company that planned to add 50 jobs, the president of the chamber of commerce told commissioners that staff worked very hard to acquire these jobs. He called it “a great moment” in economic development. 7 But 50 jobs, while welcome, is just a drop in the bucket compared to what Wichita needs.

For Spirit to create 349 jobs over five years, we must let the company escape paying property tax and sales tax on $280 million of property.

In order to prepare the incentives package for another company, several events took place. There was a visit to the company. Then another visit and tour. Then economic development officials helped the company apply for benefits from the Kansas Department of Commerce. Then these officials worked closely with Wichita city staff on an incentive package. City documents stated that the expansion will create 28 jobs over the next five years. Obtaining these jobs took a lot of effort from Wichita and Kansas economic development machinery. Multiple agencies and fleets of bureaucrats at GWEDC, the City of Wichita, Sedgwick County, and the State of Kansas were involved. Wichita State University had to be involved. All this to create 5.6 jobs per year for five years.

This illustrates a capacity problem. Acquiring these jobs took a lot of bureaucratic effort, which has a cost. It required expensive incentives. Occasionally the city works with a large number of jobs, as in the recent case of Cargill. But those jobs required many expensive incentives, and no jobs were created. The incentives and effort were spent simply to persuade Cargill to remain in Wichita instead of moving elsewhere.

All this assumes, of course, that the incentives are necessary. Either that, or there is a larger problem. If companies can’t afford to make investments in Wichita unless they receive exemptions from paying taxes, we must conclude that taxes are too high. It’s either that, or these companies simply don’t want to participate in paying for the cost of government like most other companies and people do.

The large amount of bureaucratic effort and cost spent to obtain relatively small numbers of jobs lets us know that we need to do something else to grow our local economy. We need to create a dynamic economy, focusing our efforts on creating an environment where growth can occur organically without management by government. Dr. Art Hall’s paper
Embracing Dynamism: The Next Phase in Kansas Economic Development Policy provides much more information on the need for this. 9

In particular, Hall writes: “Embracing dynamism starts with a change in vision. Simply stated, the state government of Kansas should abandon its prevailing policy vision of the State as an active investor in businesses or industries and instead adopt the policy vision of the State as a caretaker of a competitive ‘platform’ — a platform that seeks to induce as much commercial experimentation as possible.” But our economic development policies are that of an “active investor,” and the cost of incentives increases the cost of experimentation.

Another thing we can do to help organically grow our economy and jobs is to reform our local regulatory regime. Kansas Policy Institute released a study of regulation and its impact at the state and local level. This is different from most investigations of regulation, as they usually focus on regulation at the federal level. 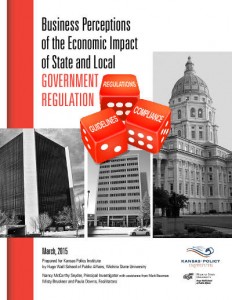 Following is an excerpt from the introduction by James Franko, Vice President and Policy Director at Kansas Policy Institute. It points to a path forward.

Surprising to some, the businesses interviewed did not have as much of a problem with the regulations themselves, or the need for regulations, but with their application and enforcement. Across industries and focus group sessions the key themes were clear — give businesses transparency in what regulations are being applied, how they are employed, provide flexibility in meeting those goals, and allow an opportunity for compliance.

Sometimes things can be said so often as to lose their punch and become little more than the platitudes referenced above. The findings from Hugo Wall are clear that businesses will adapt and comply with regulations if they are transparent and accountable. Many in the public can be forgiven for thinking this was already the case. Thankfully, local and state governments can ensure this happens with minimal additional expense.

A transparent and accountable regulatory regime should be considered the “low hanging fruit” of government. Individuals and communities will always land on different places along the continuum of appropriate regulation. And, a give and take will always exist between regulators and the regulated. Those two truisms, however, should do nothing to undermine the need for regulations to be applied equally, based on clear rules and interpretations, and to give each business an opportunity to comply. (emphasis added)

Creating a dynamic economy and a reformed regulatory regime should cost very little. The benefits would apply to all companies — large or small, startup or established, local or relocations, in any industry.

Our civic leaders say that our economic development efforts must be reformed. Will the path forward be a dynamic economy and reformed regulation? Or will it be more bureaucracy, chasing jobs a handful at a time?