In Wichita, why do some pay taxes, and others don’t?

A request by a luxury development in downtown Wichita raises issues, for example, why do we have to pay taxes?

Tomorrow the Wichita City Council considers yet another layer of business welfare for The Lux, a luxury real estate development in downtown Wichita. This project, despite having already received millions in assistance from taxpayers, is not economically viable, according to city documents.

Because the transaction contemplated tomorrow is shrouded in the mystery of Internal Revenue Bonds (IRBs), we can expect that the important aspects of this transaction will be under-reported. We’re likely to see headlines that The Lux is receiving $14,450,000 in IRBs. City council members may clumsily explain to citizens that the city is not lending this money, and that taxpayers are not on the hook if the bonds are not repaid. The city may tell us that a local bank will buy the bonds and that the Lux will issue a mortgage to protect the bank’s interest, as though that was a matter of public concern rather than a private business dealing.

The item on tomorrow’s agenda features another example of the city adapting to meet the needs of its cronies. The letter of intent originally called for a certain level of investment, but now that has been reduced:

The Letter of Intent approved by the City Council stated that “LUX Building, LLC has represented that it will make a total capital investment in the project of at least $24,000,000.” The projection was intended to be an estimate of the not-to-exceed project costs at that time and not a requirement of minimum capital investment. Since the actual total cost of the project will be closer to $20,000,000 the developer is requesting that the minimum investment requirement be waived.

It’s a small point, but big numbers like $24,000,000 are a “wow” factor to city council members and are cited and praised as evidence of the goodness of the city’s economic development incentives. But now: never mind.

Why do we tax?

There are a variety of theories of taxation, such as taxes being “dues” paid, or payment for services the city provides, or as the cost of a civilized society. In any case, we have to wonder why the owners of The Lux are being excused from paying perhaps one million dollars of these dues, or payment for government services it will consume, or it share of the cost of a civilized society. 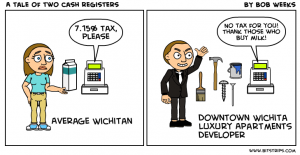 Supporters will point to the cost/benefit ratios. These ratios are simply recognition that economic activity is good, and government taxes it. But unless the city, county, and state will each reduce their spending by the amount of sales tax forgiveness given to The Lux, other taxpayers have to pay.

It’s worth noting that the subsidy being granted to The Lux is in the form of sales tax exemption. Kansas taxes food at the same rate as everything else. This means that while the owners of The Lux are enjoying the privilege of saving perhaps one million dollars in sales tax, others — including poor people struggling to provide food for their families — are making up the sales tax that The Lux is not paying.

In fact, this missing spending and investment is more valuable than government spending on this project. That’s because when people spend and invest on their own, they choose what is most important to them, not what is important to politicians and bureaucrats. This is a special problem in Wichita, where the mayor and city council members have a history of awarding over-priced no-bid contracts to their campaign contributors. (A separate item on tomorrow’s agenda will attempt to address that problem.)

Sometimes these subsidies are justified by the claim that renovating historic buildings like The Lux is more expensive than new construction. If that’s true, we have to recognize that investing in, or living in, a historic building is a lifestyle choice. The people who make these choices should pay themselves, just like we expect others to pay for the characteristics of the housing they choose. For example , building a home with granite kitchen counter tops and marble floors in the bathrooms is more expensive than a plainer home. These premium features are chosen voluntarily by the homeowner, and it is right and just that they alone should pay for them.

We should recognize historic buildings for what they are: a premium feature or amenity whose extra cost should be born solely by those who chose to own them or rent them. There’s no difference between these premium features and choosing to live in a historic building. Those who desire them choose them voluntarily, and should pay their full cost. Forcing everyone to subsidize this choice is wrong. It’s an example of a special interest gone wild. But in Wichita we call this economic development.

The nature of tax credits

The sales tax exemption is not the only form of taxpayer subsidy The Lux will receive. The historic preservation tax credits approved for this the project are worth millions. These credits are equal to grants of cash. They are a cost to government that taxpayers must bear.

The use of tax credits to pay for economic development incentives leads many to believe that what government is doing is not a direct subsidy or payment. In order to clear things up, perhaps we should require that government write checks instead of issuing credits.

It’s time to recognize these historic preservation tax credits as payments to a special interest group. Unfortunately, as with most special interest groups, the group receiving the payment — tax credits in this case — has an extreme interest in the matter. They benefit greatly. But to the rest of the populace — well, does it really matter to them? John Stossel explains the problem like this:

The Public Choice school of economics calls this the problem of concentrated benefits and dispersed costs. Individual members of relatively small interest groups stand to gain huge rewards when they lobby for government favors, but each taxpayer will pay only a tiny portion of the cost of any particular program, making opposition pointless.

That’s the situation we face with the historic preservation tax credits. A few real estate developers will enrich themselves at taxpayer expense. Well-to-do renters will get a better deal. To everyone else, it’s just another way that government nickels and dimes us to death.

What’s the matter with Wichita?

We have to wonder why so many projects in downtown Wichita require massive doses of taxpayer subsidy. Here’s what city documents tell us:

The Office of Urban Development has reviewed the economic (gap) analysis of the project and determined a financial need for incentives exists based on the current market. The project lender, Intrust Bank, has advised that the bank cannot increase the loan amount, leaving a gap in funding sources that is filled by the City’s facade program.

When the city is willing to fill in financing gaps, you can be sure that gaps will be created.

Here’s an idea: Instead of handing out economic development incentives on a piecemeal basis, let’s try to fix what prevents projects like The Lux from moving forward on its own. If, in fact, the obstacles are real, and don’t exist only in the imagination of those seeking to finance their projects on the backs of Wichita taxpayers.