Wichita city officials promote an article that presents an unrealistic portrayal of the local economy.

An article promoting the Wichita economy 1 was noticed and promoted by official City of Wichita sources.

A tweet came from the official @CityofWichita Twitter account and reads “We have been named one of the top two recession-proof cities in the nation by @Livability. Wichita was praised for its ability to withstand turbulence in the national economy, steady job growth and the state’s low income-to-debt ratio.” 2

Those who retweeted this include the Wichita Regional Chamber of Commerce, Wichita Economic Dev (“Promoting, building and preserving Wichita’s economic strength to ensure Wichita is the preferred location for new, existing and expanding organizations.”), and Scot Rigby, who is who is Assistant City Manager, Director of Development Services for the City of Wichita. City officials also shared the article of the city’s Facebook page. 3 That post has been shared 169 times.

One quote from the article highlights Wichita’s low unemployment rate: “In 2018, the city saw unemployment fall to 3.5 percent — the lowest it’s been since May 1999.” Here’s some data regarding this claim: 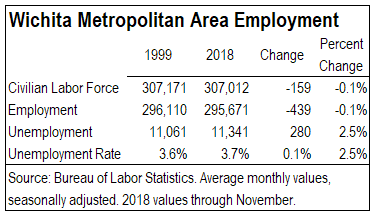 In the table, we see that the unemployment rate (monthly average) for 2018 is nearly unchanged from 1999. Also nearly unchanged for these 19 years are the civilian labor force and number of jobs. Both values are slightly lower now. This is not “steady job growth,” as Wichita officials proclaim.

Is 0.9 percent job growth good? Nationally, the economy is expected to continue strong growth, although perhaps slightly slower than in 2018. 6 Nationally, job growth is forecast at 1.7 percent for 2019. 7 Wichita’s forecast rate of 0.9 percent is 53 percent of the national rate.

It’s not only employment that has been bad news. In 2017 the Wichita economy contracted. 8 Personal income has grown only slowly. 9

We really must wonder what Wichita officials are thinking and where they get their data.