In 2014 it is likely that Wichitans will be asked to pay an increased sales tax, part of which would fund the existing bus transit service, as the system is not sustaining itself. Another part of the increased sales tax might expand the service. Wichitans ought to think twice before voting to spend additional taxpayer funds for either reason. In fact, Wichita ought to consider spending less on public transit, and look to the private sector to provide transit that people want to use, and which meets their real needs.

Transit is expensive. To be more precise, government-provided transit is expensive. I’ve gathered data from the National Transit Database and provided it in a more useful format that that provided by the government. You may <a href=https://wichitaliberty.org/visualization-national-transit-database/” target=”_blank”>click here to use this interactive visualization of operating costs. (This table provides the codes that are used.) As for Wichita, the nearby excerpt (click for a larger version) shows that for 2011, the cost per passenger mile for the “regular” bus service was $0.97. This is not the cost to move a bus one mile. It is the cost to move one passenger one mile. This value is not out of line compared to other cities.

If Wichita were to expand its transit service to offer wider coverage and longer hours of service, the cost per passenger mile probably would not go down. We would still have a system that is very expensive, especially considering the level of service that would still be provided.

Can the private sector do better? One thing we could do is to outsource or privatize the transit system. Government would still pay for the system, but the private sector would operate the buses. This would likely be an improvement, as outsourcing almost always results in lower costs and improved service.

(By the way, many people would be surprised to learn of the fraction of expenses paid for through fares. Considering operating expenses only, the number is 13.5 percent. Considering operating and capital costs, just 12.1 percent comes from fare revenue. The remainder is provided by taxpayers. So when a bus rider puts a dollar in the farebox, taxpayers contribute an additional six dollars to fund the system.)

What Wichita could do to really improve service is to allow private competition to the existing transit system. Here’s an example of what could happen:

Brooklyn’s dollar van fleet is a tantalizing demonstration of how we might supplement mass transit with privately-owned mini-transit entrepreneurs.

America’s 20th largest bus service — hauling 120,000 riders a day — is profitable and also illegal. It’s not really a bus service at all, but a willy-nilly aggregation of 350 licensed and 500 unlicensed privately-owned “dollar vans” that roam the streets of Brooklyn and Queens, picking up passengers from street corners where city buses are either missing or inconvenient. The dollar van fleet is a tantalizing demonstration of how we might supplement mass transit to include privately-owned mini-transit entrepreneurs, giving people alternative ways to get around, and creating jobs. (The (Illegal) Private Bus System That Works, The Atlantic.)

There are other things we could do to help improve transit service in Wichita. On his television show, John Stossel recently had a segment on a system called “Lyft.” This is a system available in about a dozen large cities in America, and there are other similar systems. You might sign up to be a driver. You go through a background check, and if you pass, you’re a driver for Lyft. Then people who need a ride use their smart phone to request a trip. You, as a Lyft driver, can decide if you’d like to provide the ride.

After the driver drops off the rider, the rider — that is the customer — decides how much to pay the driver for the ride. The system makes a suggestion, but other than that it’s up to the customer to decide how much to pay. As you might imagine, the system uses feedback to rate both drivers and customers. People in the Lyft system have an incentive to be good providers of service, and also good consumers of service.

Isn’t that a tremendous contrast to the way government works? Government works through force — through taxation — requiring all of us to pay to support a bus system that very few people use. And few people use the system because — like most government programs — the service is lousy. It’s a self-perpetuating feedback loop. Lousy government service leads to few people using the service, which leads to the need for more subsidy. But in the Lyft system people willingly cooperate, aided by technology.

Could Lyft work in Wichita? Not likely, because government stands in the way. I’m pretty sure Lyft would be illegal in Wichita. The city recently passed taxicab regulations that are quite strict: Taxi companies must have a central office, staffed at least 40 hours per week; a dispatch system operating 24 hours per day, seven days per week; enough cabs to operate city-wide service, which the city has determined is ten cabs; and a supervisor on duty at all times cabs are operating.

These regulations stifle innovation and entrepreneurship. Things like Lyft and the dollar vans aren’t compatible with these regulations. These regulations mean that our present transit and taxi service — which no one seems happy with — is all that we will ever have.

Here’s something else: In the Lyft system, passengers ride in the front seat of the car next to the driver. Total strangers do that! Can you imagine if you asked to sit in the front seat of a taxicab in Wichita? This is the private sector versus government-regulated monopolies. 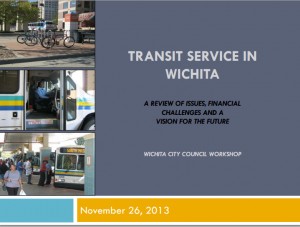 Recently the director of the Wichita transit system made a presentation to Wichita City Council members outlining various possibilities about what Wichita could do with bus service. Was allowing the private sector a role in providing transit a possibility? Not that I heard. It’s just not in the DNA of government bureaucrats and unfortunately, many elected officials, to consider letting the private sector do a job.