Do you get the feeling that Wichita’s promises and projections regarding water are quite, well, fluid?

Six years ago a Wichita city news release stated “Through the ASR project, Wichita will receive the water it needs through the year 2050 …” (“Wichita’s Future Water-Supply Plan Moves Ahead,” July 3, 2008)

But now, Wichitans are told there is a water crises, and the way to solve it is by voting for a sales tax of one cent per dollar. Either that, or the city will meet the crisis by borrowing money and having water users pay an extra $221 million in interest on a $250 million project.

Perhaps the city’s 2008 news release was based on overly-optimistic engineering. Perhaps the claim of being able to meet our water needs through 2050 is based on all four phases of ASR being completed.

Now, the most recent city documents promise much less: “A new water supply is expected to delay the year (with no conservation) in which drought protection for a 1% drought is provided. This date is projected to be 2030.”

Do you get the feeling that the city’s promises and projections regarding water are quite, well, fluid? Do you remember that eleven years ago then-Mayor Bob Knight was told we had sufficient water for the next 50 years?

An adequate water supply is vitally important. But we are not in a crisis. We had plenty of water this year. Cheney Reservoir has been full most of the year, although currently a little less than full as it’s been dry the last month or so.

Wichita’s water crisis — to the extent it exists — does not need to be solved in a rush. The risks of making big-dollar mistakes are too high to hurry.

Speaking of the ASR project: At a time of heightened interest in ASR, the project’s website has been abandoned. Readers will find language like Phase II “will be complete by the end of 2011.” The last newsletter was for December 2011.

The first years of operation of Phase II of ASR have not been a total success. Maybe that’s why there’s been no news. 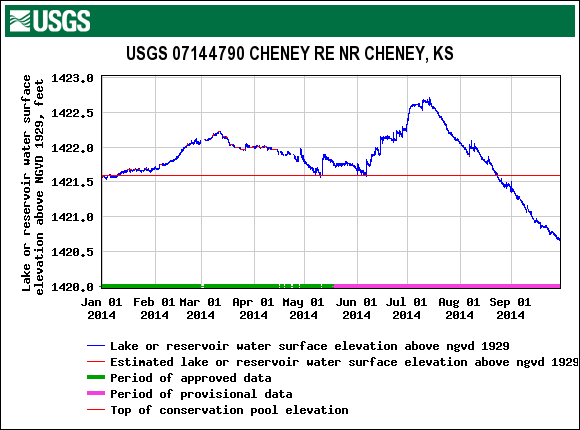