Wichitans have choices; perhaps not information

The Wichita Eagle publishes a voter guide before each election. While this is a useful civic service, readers of the newspaper might wonder what is the point of allowing candidates to make statements and claims without being held accountable.

Here are two examples of candidates responding to the question “Assess the city’s success in downtown revitalization so far. How do you see that role evolving in the future?”

The trend in downtown redevelopment is showing a definite payoff in private investment exceeding $250 million since 2009. People are moving downtown and more private developers are starting projects in the area all of the time. I think that the city will still need to play a role in assuring that infrastructure, especially public green spaces and strategically placed parking, is in place so that private development can be attracted.

Wichita adopted its Downtown Master Plan in 2010 following an 18-month process involving input from several thousand Wichitans. Since the plan’s adoption, there has been a growing confidence in downtown development, which has resulted in more than $150 million in private investment. The City’s role will be to continue to foster private investment supported by public infrastructure improvements where needed. 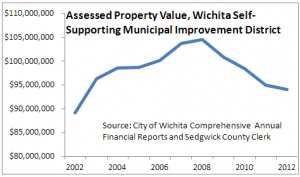 But evidence of a payoff for the taxpayer is hard to find. At the same time hundreds of millions in investment is claimed, the assessed value of property in downtown Wichita is declining.

We’re left to wonder whether readers of the Wichita Eagle are aware of the apparent contradiction between candidates’ claims and evidence from the real world.

On another issue, the influence of campaign contributions, readers of the Eagle will probably also be uninformed about candidates’ actions. In response to the question “How would you handle a vote on an issue involving a campaign contributor?” Council Member James Clendenin (district 3, southeast and south Wichita) supplied this answer:

No different than any other vote. I will vote for the best interest of the citizens Wichita and District III. I answer directly to the voters.

I would continue to handle it the way I always have. The city has good campaign finance laws that make sure no one individual or group can buy a council person’s vote. The law limits the contributions to a low enough amount that no one contribution can make or break a campaign. I treat each donation whether large or small the same and thank the community for their faith and support in what I do.

The candidates’ lofty claims of independence from campaign contributions are difficult to believe. There is simply too much money given, and the candidates’ actions are too suspect.

As an example, in 2012, these two candidates received campaign contributions from two sources: A group of principals and executives of Key Construction, and another group associated with theater owner Bill Warren. Except for $1.57 in unitemized contributions to Clendenin, these two groups accounted for all contributions received by these two incumbents.

Those associated with Warren gave $5,000, all to Clendenin.

The problem is that both of these groups have benefited from the cronyism of the Wichita City Council, in particular members Williams and Clendenin.

Here’s one example, perhaps the worst. In August 2011 the council voted to award Key Construction a no-bid contract to build the parking garage that is part of the Ambassador Hotel project, now known as Block One. The no-bid cost of the garage was to be $6 million, according to a letter of intent. Later the city decided to place the contract for competitive bid. Key Construction won the bidding, but for a price $1.3 million less.

Both Williams and Clendenin voted for this no-bid contract that was contrary to the interests of taxpayers. They didn’t vote for this reluctantly. They embraced it.

Last summer Williams and Clendenin, along with the rest of the council, participated in a decision to award the large contract for the construction of the new Wichita airport to Key Construction, despite the fact that Key was not the low bidder. The council was tasked to act in a quasi-judicial manner, to make decisions whether discretion was abused or whether laws were improperly applied.

Judges shouldn’t preside over decisions that hugely enrich their significant campaign contributors. No matter what the merits of the case, this is bad government.

Williams was also the beneficiary of campaign contributions immediately before a Methodist minister asked the city to approve over two million dollars in tax increment financing. In 2008, the Reverend Dr. Kevass J. Harding wanted to spruce up the Ken-Mar shopping center at 13th and Oliver, now known as Providence Square. Near the end of June, Kevass Harding and his wife contributed a total of $1,000, the maximum allowed by law, to the campaign of Wichita City Council Member Lavonta Williams (district 1, northeast Wichita). This was right before Harding appeared before the city council in July and August as an applicant for tax increment district financing (TIF).

By the way, this project, under Harding’s management, foundered until the city council offered a bailout. By then Harding had found new partners. No surprise these partners included Key Construction, Williams’ sole source of campaign funds in 2012.

Wichitans who rely on the Wichita Eagle for advice on voting won’t likely be aware of these facts regarding these candidates.