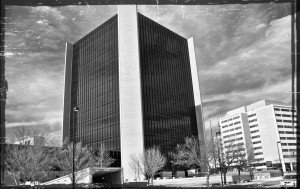 Compared to peer areas, Wichita’s record of growth in gross domestic product is similar to that of job creation: Wichita performs poorly.

Looking at growth in GDP, Wichita lags behind the metropolitan statistical areas that we consider our peers (according to Visioneering Wichita), but not behind all the peer cities that I selected. Wichita does better than Springfield, Illinois, for example. I chose to include that as a peer metropolitan area because that’s the immediate past city that Gary Plummer worked in. He was president of that city’s Chamber of Commerce, and is now president of the Wichita Metro Chamber of Commerce.

What Wichita is missing

If the Wichita-area GDP grew faster, Wichita could generate many more jobs. 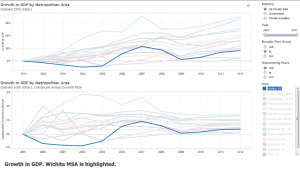 From 2001 to 2012, Wichita GDP grew at a rate of 0.734 percent per year, compounded annually. U.S. Metropolitan areas, as a whole, managed 1.571 percent growth over the same period. That seems like a small difference, just 0.837 percentage points. But over time, compounding adds up, so to speak. Here’s what it could amount to.

If you’d like to use the interactive visualization of metropolitan GDP data, you may click here to open it in a new window. Data is from U.S. Bureau of Economic Analysis along with author’s own calculations. Visualization created using Tableau Public.