Kansas liberals accuse Republicans of “spinning” statistics on school funding. Can we look at some actual numbers? 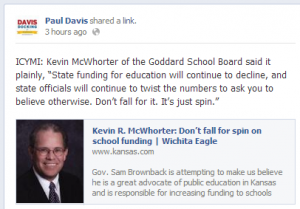 This weekend another independent advocate for our schools called attention to Sam Brownback’s attempt to mislead Kansans about his real record on education. The fact is, Sam Brownback made the largest cut to our schools in Kansas history — leading to larger class sizes, school closings, and increased fees for parents.

But being the politician that he is, Sam Brownback is trying to spin his record. We won’t be fooled.

Kevin McWhorter of the Goddard School Board said it plainly, “State funding for education will continue to decline, and state officials will continue to twist the numbers to ask you to believe otherwise. Don’t fall for it. It’s just spin.”

Davis is referring to an op-ed in the Wichita Eagle written by a Goddard school board member. (Kevin R. McWhorter: Don’t fall for spin on school funding, November 17, 2013)

In his op-ed, McWhorter complains that present funding from the state is not as high as statute requires. He calls that a cut. He concludes that the “governor’s economic policy is a train wreck” and that “state funding for education will continue to decline.” 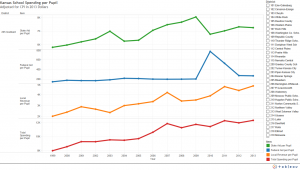 Nearby you may find charts of data for the Goddard school district. (Click for larger versions.) You may draw your own conclusions. Recall that Sam Brownback became governor in 2011. The charts are derived from visualizations of data obtained from the Kansas State Department of Education. You may click here to access the visualization for school spending. Information about school employment, including a video and interactive visualization is at Kansas school employment trends. 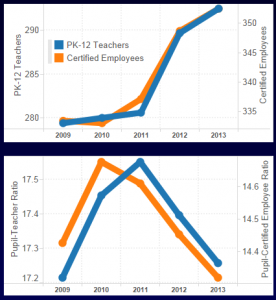 Charts for the entire state look similar: Employment going down, then rising. Ratios of employees to students improve correspondingly. This is not the case in every school district, however.

But not everyone believes the statistics. When the Kansas Republican Party posted a chart of statewide school employment on its Facebook page, someone remarked “Where do I find the facts supporting this graft [sic]? Where did the numbers come from? How are these more than 400 additional teachers and 500 certified employees being paid when school funding has been reduced?”