Politicians and government officials like clawbacks in economic development incentive agreements. But do these provisions have any negative aspects?

When business firms receive economic development incentives from government, the incentives may be given conditionally. That is, there may be benchmarks or conditions that the company has agreed to meet. These benchmarks are most commonly in the form of job counts or payroll value, and sometimes capital investment.

Government officials like the idea of clawbacks. It lets them appear to be responsible in the awarding of incentives. Politicians and bureaucrats tell voters that government is looking out for them. If a company accepts incentives and doesn’t create every last job that was promised, by golly, the politicians say, we’re going to get back the taxpayers’ money for them.

Clawbacks can be useful. If a company fraudulently seeks and receives incentives, it’s good there’s a way to retrieve the money. More commonly, however, the clawbacks are to protect taxpayers in case the business plans do not work out as hoped, and the promised jobs are not delivered.

It’s understandable that taxpayers want to see clawbacks in place to protect their investment. We realize that politicians want to appear to be responsible with taxpayer funds. But there are several problems. When a company has not achieved its benchmarks, it is likely because the company is not performing well financially and economically. The company may not have the capacity to make the clawback payments. This recently happened in Wichita with a company that had received a forgivable loan. The company did not meet the required benchmarks, and was not able to repay the loan. The city is allowing them to make their clawback payments over time. 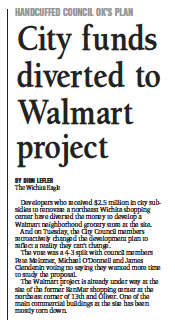 Sometimes government may choose not to enforce clawbacks that have been agreed to. In the case of a Wichita company that had received a property tax abatement but suffered a downtown in its business and was not able to meet the benchmarks, the city’s economic development director told the city council “I don’t think it would be productive at this time to further penalize them — as the market has already penalized them — by putting them back on the tax rolls at this time.” In another Wichita example, the city had a personal guarantee from a real estate developer to cover shortfalls in a tax increment financing district, But instead of holding the developer to the terms of the contract, the city issued a bailout. I estimated the cost to city taxpayers at about $30,000 per year, or $516,000 over the course of the loan.

These examples reveal a problem with clawbacks. Will struggling companies be able to pay the clawback? If a company is struggling financially and hasn’t met the benchmarks, aggressively pursuing clawback payments might be the factor that forces a company to shut down. That means fewer jobs. Would it be better to let the company retain its incentives and continue to operate, even though it hasn’t met the benchmarks? It is presumably providing some good, after all.

There’s also the consideration that if clawback provisions are too strict, will companies be discouraged from applying for incentives? A recent loan considered by the Sedgwick County Commission contemplated one or more of four different forms of security: a mortgage, a security agreement, a collateral assignment of life insurance, or a corporate guaranty. 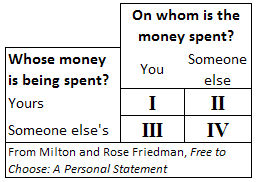 The issue of clawbacks is a window into the difficulties of economic development incentives. Officials tell us they are making an investment in the community’s future. But it’s a transaction unlike any investment decision made in the private economy. For one, government officials are not spending and investing their own money (or shareholders’ money) for their own benefit (or shareholders’ benefit). Instead, they’re using someone else’s money, and spending it on still someone else. As Milton Friedman has noted, this is absolutely the worst way to spend money. (Click here for an explanation of the diagram.)

When negotiating clawback provisions, similar considerations apply. The government’s economic development officials are not negotiating over the security of their own investment. To them, it’s someone else’s money. They did not earn or raise it, and ultimately they are not responsible for it. But for the party across the table — the business firm — the transaction concerns their own money, and the motivations and responsibilities are very different.