A learning opportunity for Wichita

Next month the Wichita Metro Chamber of Commerce brings a speaker to town who might be able to offer Wichita helpful advice. As reported in the Wichita Business Journal, “Jim Clifton, the chairman and CEO of Gallup Inc., says cities that create a culture of entrepreneurial development are the ones succeeding today.”

Clifton is the author of The Coming Jobs War. Here’s material from the inside flap of this 2011 book:

WHAT EVERYONE IN THE WORLD WANTS IS A GOOD JOB

In a provocative book for business and government leaders, Gallup Chairman Jim Clifton describes how this undeniable fact will affect all leadership decisions as countries wage war to produce the best jobs.

Leaders of countries and cities, Clifton says, should focus on creating good jobs because as jobs go, so does the fate of nations. Jobs bring prosperity, peace, and human development — but long-term unemployment ruins lives, cities, and countries.

Creating good jobs is tough, and many leaders are doing many things wrong. They’re undercutting entrepreneurs instead of cultivating them. They’re running companies with depressed workforces. They’re letting the next generation of job creators rot in bad schools.

A global jobs war is coming, and there’s no time to waste. Cities are crumbling for lack of good jobs. Nations are in revolt because their people can’t get good jobs. The cities and countries that act first — that focus everything they have on creating good jobs — are the ones that will win. 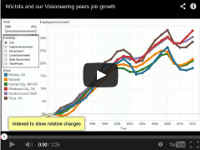 It sounds like Clifton has some good advice that Wichita could follow in two areas: Fostering entrepreneurship and improving schools. Wichita certainly needs help in creating jobs. In the nearby video, the record of job growth for Wichita, the nation, and our Visioneering peers (Kansas City, Omaha, Oklahoma City, and Tulsa) is presented. (Click here to watch the video on YouTube, which may work best.) If you don’t have time to watch, I’ll let you know that Wichita performs badly in this comparison. In last place, that is. 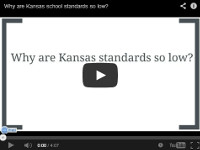 Regarding schools, the record of Kansas schools is not as good as it first appears if we look beyond a simple comparison of NAEP scores with other states. As shown in Kansas school test scores, a hidden story, Kansas trails Texas in most areas of comparison. Further, the National Center for Education Statistics, in the most recent version of Mapping State Proficiency Standards Onto the NAEP Scales, found that Kansas had weakened some of its standards. NCES judged Kansas’ standards as being low to begin with, and then they were lowered farther. This was during the years immediately after the Kansas Supreme Court ordered higher school spending, and while the legislature complied with that order. See Why are Kansas school standards so low?

But our government leaders in Wichita and Kansas won’t recognize these facts, at least not publicly.

Wichita’s economic development policies are definitely stacked against the entrepreneur. As Wichita props up its established industries, it makes it more difficult for young firms to thrive. Wichita uses programs that are targeted investment in our economic future, our elected officials and bureaucrats believing that they have the ability to select which companies are worthy of public investment, and which are not. It’s a form of centralized planning by the state that shapes the future direction of the Wichita and Kansas economy.

These targeted economic development efforts fail for several reasons. First is the knowledge problem, in that government simply does not know which companies are worthy of public investment. This lack of knowledge, however, does not stop governments from creating policies for the awarding of incentives. This “active investor” approach to economic development is what has led to companies receiving grants or escaping hundreds of millions in taxes — taxes that others have to pay. That has a harmful effect on other business, both existing and those that wish to form.

(For a summary of the peer-reviewed academic research that examines the local impact of targeted tax incentives from an empirical point of view, see Research on economic development incentives. A sample finding is “General fiscal policy found to be mildly effective, while targeted incentives reduced economic performance (as measured by per capita income).”

There is also substantial research that is it young firms — distinguished from small business in general — that are the engine of economic growth for the future. We can’t detect which of the young firms will blossom into major success — or even small-scale successes. The only way to nurture them is through economic policies that all companies can benefit from. Reducing tax rates for everyone is an example of such a policy. Abating taxes for specific companies through programs like IRB, EDX, PEAK, and HPIP are examples of precisely the wrong policy.

In explaining the importance of dynamism, Hall wrote: ” Generally speaking, dynamism represents persistent, annual change in about one-third of Kansas jobs. Job creation may be a key goal of economic development policy but job creation is a residual economic outcome of business dynamism. The policy challenge centers on promoting dynamism by establishing a business environment that induces business birth and expansion without bias related to the size or type of business.”

We need to move away from economic development based on this active investor approach, especially the policies that prop up our established companies to the detriment of dynamism. We need to advocate for policies — at Wichita City Hall, at the Sedgwick County Commission, and at the Kansas Statehouse — that lead to sustainable economic development. We need political leaders who have the wisdom to realize this, and the courage to act appropriately. Which is to say, to not act in most circumstances.