We could use the shutdown as a teachable moment

The United States government is in the third day of a partial shutdown. It’s quite a coincidence that Chapter 9 of Henry Hazlitt’s book “Economics in One Lesson” talks about government employees right at the time we’re in a government shutdown.

Here, Amanda BillyRock illustrates this chapter of “Economics in One Lesson.” (Click here to view at YouTube.)

Here’s something that’s a little shocking. I didn’t believe it when I first heard it. The news agency Reuters is reporting that the Environmental Protection Agency — the EPA — has decided that only seven percent of its employees are essential. The others are non-essential. So why do we have them, if they are not essential?

At the Department of Education, only five percent of the employees are considered to be essential and will work during the shutdown. How, I wonder, are we going to educate children during this time?

Do private sector companies have non-essential employees? Of course. But market competition provides a balancing force, a motivation to avoid waste. That’s not present as strongly in government, if at all.

I understand that we depend on government for so many things that during a shutdown — be it partial or whatever — people’s lives will be disrupted. We’re seeing news stories of people showing up at our great national parks, for example, and being turned away because the park is closed. The solution to these problems is to take these products and services away from government and let the private sector operate them.

That’s something that seems very foreign to a lot of people. Take the inspection of airplanes, for example. Right now people are saying that if government inspectors are not available to inspect airplanes, they’re going to crash. Well ask yourself this question. Does an airline strive to operate its airplanes safely only to satisfy government inspectors, or does it wish to protect the lives of its customers and employees, and safeguard its physical assets like the expensive airplanes?

Or consider a meatpacking plant. Does it endeavor to produce safe beef only because inspectors are watching, or because it is concerned for its customers and wants to avoid the terrible publicity and economic harm of a recall?

I’m not saying that beef and airplanes should not be inspected. But they shouldn’t be inspected by government. It’s very difficult to hold government accountable. When we see episodes where government breaks down, such as perhaps government inspectors who might not be doing a good job inspecting beef, the proposed solution is always more money for government. More money for more inspectors and bureaucrats. But, what if we had a private market for inspection services? If there was a failure of inspection, in other words, if a private inspection company was not being thorough, that would become known. The reputation of that company, which is its primary asset, would be harmed. No longer would we trust that company when it says the beef is safe. The company would likely fail, and someone else would provide these services. We can’t really do this with government.

Markets can provide a very strong form of regulation, if we let them work.

This government shutdown is an opportunity to realize what we really need government to do, what can be better done by the private sector, and maybe even what doesn’t need to be done at all. 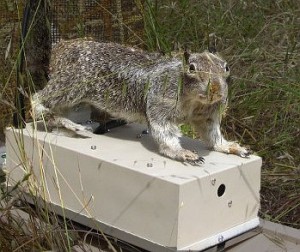 It’s a tough battle, though. Last week Nancy Pelosi said there was nowhere to cut. How about this: $325,000 was spent on a robotic squirrel named “RoboSquirrel.” This National Science Foundation grant was used to create a realistic-looking robotic squirrel for the purpose of studying how a rattlesnake would react to it. Can’t we cut that? I’m sure Pelosi would say “what would the scientific researchers do if we didn’t fund this program?” As Hazlitt tells us, they’d do something else. Hopefully something else that the market — that is, you and I — value enough to buy it because we want it, not because government taxed us to pay for it. But we can’t see that right now, while we do see robosquirrel. The seen and unseen, again.

I don’t know. Maybe I shouldn’t be so harsh in my criticism. We did learn that a successful rattlesnake attack on a squirrel involves three steps. First, striking and hitting a prey animal, and that’s usually from only about 10 inches away. Then envenomating the prey animal, and the animal may attempt to escape. Then the rattlesnake must relocate the envenomated prey animal after it succumbs to the venom.

Envenomating. I’d never heard that word before. Maybe we really need to get government back to work after all.