Let’s create something special and unique

Following, Sedgwick County Commissioner Karl Peterjohn explains something that the county could do to boost economic growth that doesn’t require government intervention, doesn’t need fleets of bureaucrats, reduces cronyism and corruption, increases economic freedom, respects property rights, reduces the power of government to control its subjects, and doesn’t give politicians opportunities to inflate their egos and boost their electoral prospects by being photographed at ground-breaking and ribbon-cutting ceremonies taking credit for spending your money on something you don’t want and which does not work to create jobs and prosperity. For these reasons — especially the latter — this won’t be popular with the political class.

I’ve gathered data from the property tax study that Peterjohn mentions and presented data specific to Wichita at Wichita property taxes compared. A version of this commentary appeared in the Wichtia Eagle.

Let’s create something special and unique

This community as well as our country is still in an economic crisis. Our community needs a boost, or a comparative growth advantage. Creating a one (1) cent city sales tax in Wichita won’t create economic growth.

In fact, raising taxes would put our community on the same path trail blazed by many other communities across our country. That is the path to fiscal perdition: Detroit. 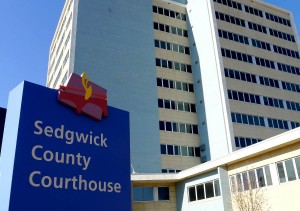 This community can create a special and unique comparative advantage by eliminating one of the major disadvantages that this state in general, and Wichita and Sedgwick County face: high property taxes. The high property tax problem for Wichita was once again identified in a national study by the Lincoln Institute on Land Policy and the Minnesota Center for Fiscal Excellence’s, “50 State Property Tax Comparison Study,” issued in March. In this study it identified the fact that Wichita’s property tax on commercial property was 38% above the national average.

The unique and special approach this community needs is instead of raising the sales tax to expand city spending, the focus should be on eliminating the county’s property tax. Currently the county imposes a 29.3 mill property tax county wide. This mill levy could be eliminated with about a 1.5 cent increase in the sales tax on a revenue neutral basis.

This type of property tax competitiveness would be beneficial on several levels. First, it would provide a unique selling proposition to help attract business to this county and Wichita.

Let’s move away from the subsidy model whose odious examples include the failed Solyndra national subsidy boondoggle.

Instead of dangling subsides, which everyone else in the eco-devo game is doing, let’s try a unique incentive: Sedgwick County just eliminated its property tax! We should try this because it can work.

In 1995 Kansas eliminated its state unemployment tax because the fund had developed a large cash balance. This five year tax moratorium created a unique economic advantage for Kansas business. Within a couple of years, the Kansas economy enjoyed a substantial surge in economic growth. Kansas became a leader enjoying some of the fastest economic growth between 1997 to 1999. Eventually, the unemployment fund’s cash balance shrank. By 1999 the unemployment tax was restored. This unique tax advantage was eliminated.

As a county commissioner I am focused on creating a special advantage for everyone in Sedgwick County. Eliminating the county’s property tax is an idea whose time has come.