The Bureau of Labor Statistics has released new data for the Quarterly Census of Employment and Wages. This represents data for the complete year of 2017, on a preliminary basis.

From December 2016 to December 2017 Sedgwick County employment was level, changing by 0.0 percent. According to the BLS news release, that ranked 317 of the 347 largest counties.

As can be seen in the chart of change in job levels, 2017 continues a trend of slower job growth in Sedgwick County, with the growth trend turning negative.

Nonetheless, Sedgwick County leaders, as well as other local leaders, proclaim momentum in the local economy. Earlier this year Sedgwick County Commissioner David Dennis penned a column for the Wichita Eagle praising the county’s efforts in economic development. 1 Dennis is also chair of the commission this year. 2

In his column, the commissioner wrote: “Economic development is a key topic for the Board of County Commissioners and for me in particular. Right now we have a lot of momentum to make our community a more attractive place for people and businesses.”

In the same column he also wrote “There is a lot of momentum and forward movement in our community right now and I’m encouraged to see what we can achieve as a team.”

Looking at these statistics, it’s difficult to see how anyone could come to these conclusions.

According to BLS, “The Quarterly Census of Employment and Wages (QCEW) program publishes a quarterly count of employment and wages reported by employers covering more than 95 percent of U.S. jobs, available at the county, MSA, state and national levels by industry.” Also “The primary economic product is the tabulation of employment and wages of establishments which report to the Unemployment Insurance (UI) programs of the United States. Employment covered by these UI programs represents about 97% of all wage and salary civilian employment in the country.”

Source of data is Bureau of Labor Statistics, Quarterly Census of Employment and Wages, specifically series ENU2017310010: “All Employees in Total Covered Total, all industries for All establishment sizes in Sedgwick County, Kansas, NSA.” Data through December 2017. 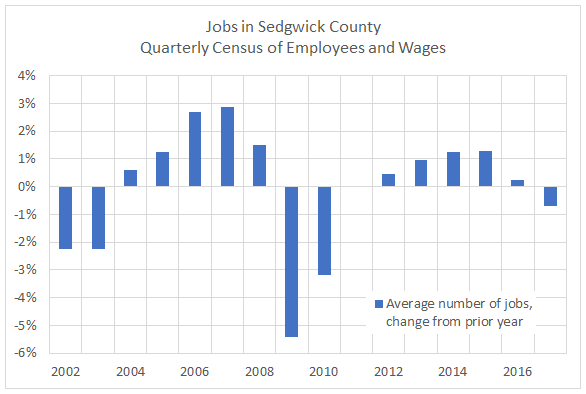