In this excerpt from WichitaLiberty.TV: How does Tax Increment Financing (TIF) work in Kansas? Is is a good thing, or not? View below, or click here to view at YouTube. Originally broadcast June 7, 2015.

One of the popular economic development incentive programs used in many states and in Wichita is tax increment financing, or TIF. When we look at it, we find that tax increment financing disrupts the usual flow of tax dollars, routing funds away from cash-strapped cities, counties, and schools back to the TIF-financed development. TIF creates distortions in the way cities develop, and researchers find that the use of TIF means lower economic growth.

Here’s how tax increment financing works. A TIF district is a geographically-defined area. In Kansas cities establish the borders. After the TIF district is defined, cities then approve one or more project plans that authorize the spending of TIF funds in specific ways.

Before the formation of the TIF district, the property pays taxes to the city, county, school district, and state as can be seen in this diagram. Because property considered for TIF is purportedly blighted, the amount of tax paid is usually small. Whatever it is, that level is called the “base.”

After approval of one or more TIF project plans the city borrows money and gives it to the project or development. The city now has additional debt in the form of TIF bonds that require annual payments. (There is now another form of TIF known as “pay-as-you-go” that works differently, but produces much the same economic effect.) 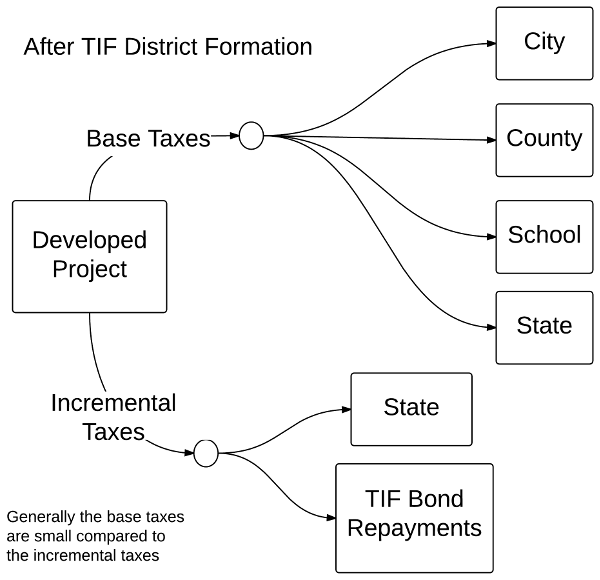 This diagram shows the flow of tax revenue after the formation of the TIF district and after the completion of a project or development. Because buildings were built or renovated, the property is worth more, and the property tax is now higher. The development now has two streams of property tax payments that are handled in different ways. The original tax — the “base” — is handled just like before, distributed to city, state, school district, and the state, according to their mill levy rates. The difference between the new tax and the base tax — the “increment” — is handled differently. It goes to only two destinations: The State of Kansas, and repayment of the TIF bonds.

This diagram highlights the difference in the flow of tax revenues. The top portion of the illustration shows development outside of TIF. We see the flows of tax payments to city, county, school district, and the state. In the bottom portion, which shows development under TIF, the tax flows to city, county, and school district are missing. No longer does a property contribute to the support of these three units of government, although the property undoubtedly requires the services of them. This is especially true for a property in Old Town, which consumes large amounts of policing.

This rerouting of property taxes under TIF goes against the grain of the way taxes are usually rationalized. We use taxation as a way to pay for services that everyone benefits from, and from which we can’t exclude people. An example would be police protection. Everyone benefits from being safe, and we can’t exclude people from benefiting from police protection.

So when we pay property tax — or any tax, for that matter — people may be comforted knowing that it goes towards police and fire protection, street lights, schools, and the like. (Of course, much is wasted, and government is not the only way these services, especially education, could be provided.)

But TIF is contrary to this justification of taxes. TIF allows property taxes to be used for one person’s exclusive benefit. This violates the principle of broad-based taxation to pay for an array of services for everyone. Remember: What was the purpose of the TIF bonds? To pay for things that benefited the development. Now, the development’s property taxes are being used to repay those bonds instead of paying for the cost of government.

Defenders of TIF will say that the developers will pay all their property taxes. This is true, but only on a superficial level. We now see that the lion’s share of the property taxes paid by TIF developers are routed back to them for their own benefit.

In their justification of TIF, supporters may say that TIF dollars are spent only on allowable purposes. Usually a prominent portion of TIF dollars are spent on infrastructure. This allows TIF proponents to say the money isn’t really being spent for the benefit of a specific project. It’s spent on infrastructure, they say, which they further contend is something that benefits everyone, not one project specifically. Therefore, everyone ought to pay.

This attitude is represented by an anonymous comment left at the Voice for Liberty, which contended: “The thing is that real estate developers do not invest in public streets, sidewalks and lamp posts, because there would be no incentive to do so. Why spend millions of dollars redoing or constructing public streets when you can not get a return on investment for that?”

This perception is common: that when we see developers building something, the City of Wichita builds the supporting infrastructure at no cost to the developers. But it isn’t quite so. About a decade ago a project was being developed on the east side of Wichita, the Waterfront at Webb Road and 13th Street. This project was built on vacant land. I searched for City of Wichita resolutions concerning this project and found that the developers spent over $3 million on things like streets, water mains, sewage lines, traffic signals, and street lights. Infrastructure, in other words. All this cost was being paid for by the Waterfront owners through special assessment taxes. The City of Wichita itself paid for none of this.

One item in particular is of interest. That is $1,672,000 for the construction of Waterfront Parkway. To anyone driving or walking in this area, they would think this is just another city street — although a very nicely designed and landscaped street. But the city did not pay for this street. Private developers paid for it. This is infrastructure that we’re told real estate developers will not pay for. But in order to build the Waterfront development, private developers did pay for all this. In a TIF district, these things are called “infrastructure” and will be paid for by the development’s own property taxes — taxes that must be paid in any case. Outside of TIF districts, developers pay for these things themselves.

By the way, do you know who owns Waterfront Parkway? The City of Wichita does. Who owns the street lights, traffic signals, and water mains? The city owns this stuff, too. Private money paid for all this infrastructure, and then it was given to the city. Within a TIF district, the developer’s own taxes pay for this, instead of paying for the cost of government like we expect taxes to do.

So why do cities use TIF? Generally, TIF is justified using the “but-for” argument. That is, nothing will happen within a district unless the subsidy of TIF is used. Recently researchers looked at the use of TIF in Chicago. They found, and I quote: “After controlling for potential selection bias in TIF assignment, this paper shows that TIF ultimately fails the ‘but-for’ test and shows no evidence of increasing tangible economic development benefits for local residents.”

They also wrote “We are able to conclude that the development seen in and around Chicago’s TIF districts would have likely occurred without the TIF subsidy. In other words, on the whole, Chicago’s TIF program fails the ‘but-for’ test.

Supporters of TIF also tout the benefit to the entire city. So what is the effect of TIF on everyone, that is, the entire city or region? Economists have studied this matter, and have concluded that in most cases, the effect is negative.

An example are economists Richard Dye and David Merriman, who have studied tax increment financing extensively. In their writings they observe that yes, things happen in TIF districts. Buildings are built or renovated. They write: “TIF districts grow much faster than other areas in their host municipalities. TIF boosters or naive analysts might point to this as evidence of the success of tax increment financing, but they would be wrong. Observing high growth in an area targeted for development is unremarkable.”

So TIF districts are good for the favored development that receives the subsidy — not a surprising finding. What about the rest of the city? Continuing from the same study, Dye and Merriman write:

That’s a powerful finding. Overall, considering everyone, TIF is not a benefit.

The Wichita city council is concerned about creating jobs, and is easily swayed by the promises of developers that their establishments will create jobs. Paul F. Byrne of Washburn University has examined the effect of TIF on jobs. He concludes: “Results find no general impact of TIF use on employment. However, findings suggest that TIF districts supporting industrial development may have a positive effect on municipal employment, whereas TIF districts supporting retail development have a negative effect on municipal employment.”

So TIF might be justified for industrial projects, but not for retail. Well, in Wichita, TIF is primarily used for retail, the type of TIF district that is found to have a negative effect on employment.

These studies and others show that as a strategy for increasing the overall well-being of a city, TIF — tax increment financing — fails to deliver prosperity, and in fact, causes more harm than good.