The Trump record on job creation

The United States economy has created many jobs since Donald J. Trump became president. How does the record compare with the previous administration and others?

The nearby chart holds plots of cumulative nonfarm jobs created over two periods of 37 months each. One line starts with February 2017, the first full month of the Trump administration. It ends with February 2020, the last month not affected by the response to the pandemic. 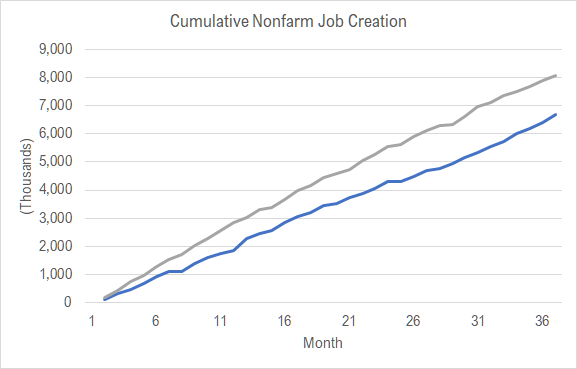 This data is from Bureau of Labor Statistics, which is part of the United States Department of Labor. The data series is CES0000000001, described as “All employees, thousands, total nonfarm, seasonally adjusted.” It is produced each month as part of the Current Employment Statistics survey. It is the most commonly cited employment series that is released monthly, with this number leading the news reports on the first Friday of each month. Here is the data presented in a table:

Another way to examine the economic record of presidents is to compare changes in metrics using a common time frame, namely, the time since each president’s administration started. The nearby chart does this, showing the percentage change in nonfarm jobs by month since the start of each administration. This chart is from my interactive visualization Presidential data explorer, which holds many additional economic series.