For 2019, the estimated population for the Wichita metropolitan area is up — and also down.

The Wichita MSA is composed of Sedgwick, Butler, Harvey, and Sumner counties.

Revisions are common, but the 2019 revision for Wichita was especially large. For 2019, the average adjustment, with all metros weighted equally, was up 0.63 percent. The two metros closest to Wichita in the proportional size of revision were Dallas-Fort Worth-Arlington, TX, down by 1.11 percent, and Nashville-Davidson–Murfreesboro–Franklin, TN, down by 1.36 percent.

I gathered data and present a nearby table holding estimated populations for the Wichita metro starting in 2010 and for four vintages. “Vintage,” in this context, refers to the year the data was produced. (Sort of. The data released in May 2020, which provides values for 2019, is labeled “vintage 2019.”)

With the downward revision of the estimates, we now believe the population in 2019 is roughly what we thought it was in 2014. A nearby chart plots the estimated population, shown separately based on 2019 and 2018 vintages. 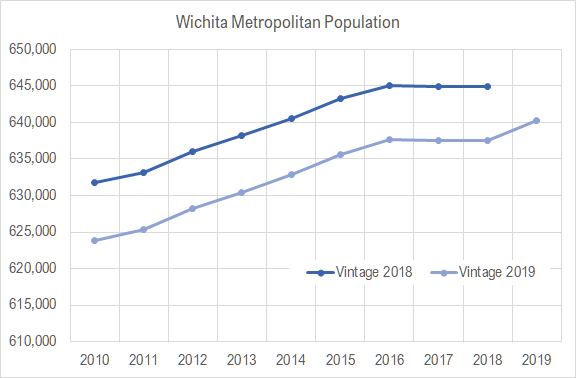