Where are our documents?

Government promotes and promises transparency, but finds it difficult to actually provide.

In this excerpt from WichitaLiberty.TV, I give some examples of how little information government actually shares with us, despite its proclamations. Click here to view in high definition at YouTube. Following, the script for this video excerpt.

During the campaign for the one cent per dollar Wichita city sales tax last year, a city document promised this if the tax passed: “The process will be transparent, with reports posted online outlining expenditures and expected outcomes.” The “Yes Wichita” campaign promised “Reports will be measured and reported publicly.”

These are good ideas. The city should implement them even though the sales tax did not pass. We were promised a website if the tax passed. If it’s good for citizens to have this type of information if the sales tax had passed, it’s good for them to know in any circumstance.

Why is this information not available? Is the city’s communications staff overwhelmed and have no time to provide this type of information? During the sales tax campaign Wichita city staff had time to prepare news releases with titles like “City to Compete in Chili Cook-off” and “Jerry Seinfeld Returns to Century II.” 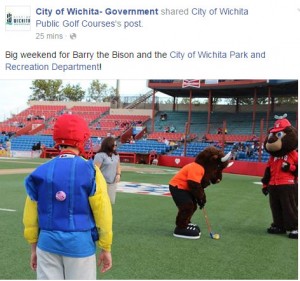 Since then the city has hired additional communications staff, adding a Strategic Communications Director in March. Now, while the city’s Facebook page has some useful information, there is also time to promote Barry the Bison playing golf.

Now Wichitans have to wonder: Was transparency promised only to get people to vote for the sales tax? Or is it a governing principle of our city? I think I know the answer.

Here’s another example. The Wichita transit system is a matter of interest right now. Funding for the system has been a problem for some years, and money for the bus system was part of the sales tax last year that Wichita voters rejected. So what is the city and the transit system doing to make information available? The answer is: not much.

Some of the fundamental documents of government agencies are agendas, agenda reports, and minutes of meetings. And there is such a thing as the Wichita transit advisory board. But good luck finding agendas and minutes for this board. They do not exist. Well, I’m sure they exist somewhere. But they’re not available on the city’s website, or on the transit system’s’ own website. I’m sure that if you call or write someone will send these documents to you. But that takes time, both for citizens and government workers.

It is not difficult to do this, making documents available. There are many city agencies that make documents available, like the city council and airport advisory board. Earlier this year a local activist mentioned the lack of agendas and minutes for the transit board, bemoaning that there was no part-time web person to post the documents. Well, you don’t need a web person to do it. It is so simple that anyone can do it for free.

Here’s an example. This summer as Sedgwick County was preparing and debating its budget, I wanted to do some research on past budgets. But on the county’s website, the only budgets available were for this year and last year. There was nothing else. 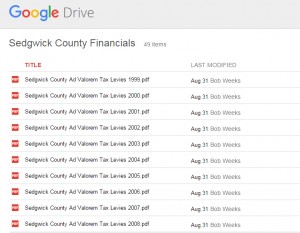 So I asked for budgets and other financial documents. I received them on CD. Then I created a shared folder using Google Drive and uploaded the documents. Now, these documents are available to the world. They can be found using a Google search. Oh, and here’s something a little ironic. These old budgets had been on the Sedgwick County website at one time. Someone made the decision to remove them.

Creating this depository of budget documents cost nothing except a little bit of time. Well, if you have a lot of data to share, you might have to pay Google a little, like ten dollars per month for each agency or person. But it is so simple that there is no excuse for the failure of agencies like Wichita Transit to make documents like agendas and minutes available. You don’t need specialized personnel to do this work. All you need is the will and desire to make the documents available.

Here’s another example of how simple it can be to achieve transparency. These days live and archived video of governmental meetings is commonplace. Commonplace, that is, except for the Wichita public schools. If you want to see a meeting of the Wichita school board, you must either attend the meetings, or view delayed broadcasts on cable TV. There’s a simple and low-cost way to fix this. It’s called YouTube.

When the Sedgwick County Commission was faced with an aging web infrastructure for its archived broadcasts, it did the sensible thing. It created a YouTube channel and uploaded video of its meetings. Now citizens can view commission meetings at any time on desktop PCs, tablets, and smartphones. This was an improvement over the old system, which was difficult to use and required special browser plug-ins. I could never get the video to play on my Iphone. 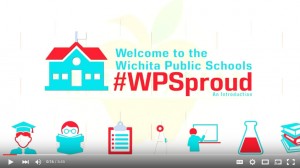 The Wichita school district could do the same. In fact, the district already has a YouTube channel. Yes, it takes a long time to upload two or three hours of video to YouTube, but once started the process runs in the background without intervention. No one has to sit and watch the process.

Earlier this year I asked why the district does not make video of its meetings available archived online. The district responded that it “has a long-standing commitment to the USD 259 community of showing unabridged recordings of regular Board of Education meetings on Cox Cable Channel 20 and more recently AT&T U-verse Channel 99.” The meetings are broadcast seven times starting the day after each meeting. Two of the broadcasts start at 1:00 am.

Showing meetings delayed on cable TV is okay. It was innovative at one time. But why aren’t meetings shown live? What if you can’t watch the meeting before it disappears from the broadcast schedule after a week? What if you don’t want to pay cable television bills? What if you want to watch meetings on your computer, tablet, or smartphone? I don’t think the fact that meetings are on cable TV means they can’t also be on YouTube.

There are two elements of irony here, if that is the correct term. One is that earlier this year the Wichita school district considered hiring a marketing firm to “gauge its reputation and suggest new branding strategies.” Here’s an idea: Act as though you care about people being able to view the district’s board meetings.

Second: In August the Wichita school district raised property taxes. The mill levy will rise by 2.86, an increase of about five percent from its present level. The projected cost is an additional $33 per year for a home worth $100.000. That is quite a large increase. That’s bad. What’s also bad is the district’s lack of respect for taxpayers. As I’ve just told you, it’s difficult to view a meeting of the school board, which is a sign that the district prefers to operate in the shadows as much as possible. The board will raise your taxes, and at the same time keep it difficult for you to see them do it.

Just for the sake of completeness, let’s not let the state of Kansas off the hook. Currently, the proceedings of the Kansas Senate and House of Representatives are not available on video. The audio is broadcast on the internet, but it’s live only. No archiving. You must listen live, or figure out some way to record it on your own.

But for eight dollars per month the legislature could make its audio proceedings available to listen to at any time. For eight dollars per month at least one podcast hosting company offers an unlimited plan. Unlimited storage, and unlimited bandwidth. That is just what is needed. And since the audio of the proceedings of the House and Senate is broadcast on the internet, it must pass through a computer somewhere. That computer could also be recording the audio. Once recorded, the process of uploading the audio to the podcast host is a trivial procedure.

But neither Kansas legislative chamber records their proceedings, according to the Secretary of the Senate and the Chief Clerk of the House. I asked. Recordings of sessions are not available because they are not made. It would be simple to record audio of the Kansas House and Senate and make it available for anyone to listen to at any time. It is almost without cost. It would have great benefit.

Oh, and I can’t forget the federal government. In January I requested a document from the United States Department of Energy. I had several conversations and emails with a records clerk. We came to agreement as to what I would receive, or at least what I am requesting to receive. But I’ve received nothing so far. I don’t know if the document will be made available to me at no charge, or will I have to pay thousands of dollars. The Department of Energy is working on my request, they say. Our congressman Mike Pompeo and his office have intervened on my half. But after nine months: nothing.

All these levels of government — city, county, school district, state, and federal — say they value open records and transparency. But let me ask you: Do you think they really mean it?