Downtown Wichita population is up

Data released today by the United States Census Bureau shows the estimated population for zip code 67202 in 2019 was 1,751, an increase of 80 from the prior year.

Zip code 67202 is greater downtown Wichita, from the Arkansas River east to Washington, and Kellogg north to Central, roughly.

The source of this data is U.S. Census Bureau, 2015-2019 American Community Survey 5-Year Estimates. This is not the Bureau’s estimate of the population in 2019. This is because for areas of population less than 65,000, the Bureau does not provide one-year estimates. Instead, the five-year estimates use data gathered over a longer time period in order to provide greater accuracy.

The 90 percent confidence interval for the 2019 estimate is plus or minus 256 persons. This means the Bureau is confident the population is between 1,495 and 2,007, with 90 percent probability.

Note that Downtown Wichita — the development agency — reports the downtown population as 2,778, which is 58.7 percent higher than the Census Bureau. It is extraordinarily unlikely that the Downtown Wichita numbers are anything near the actual population. 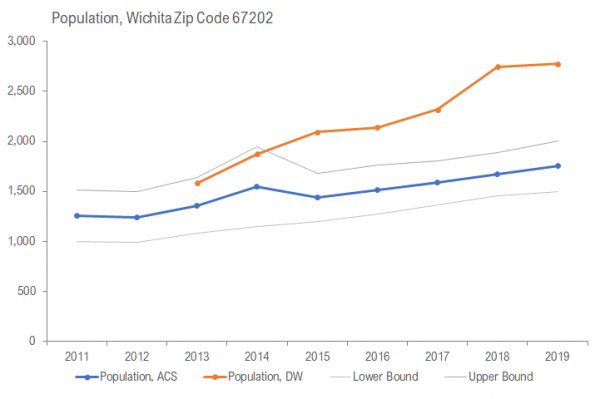 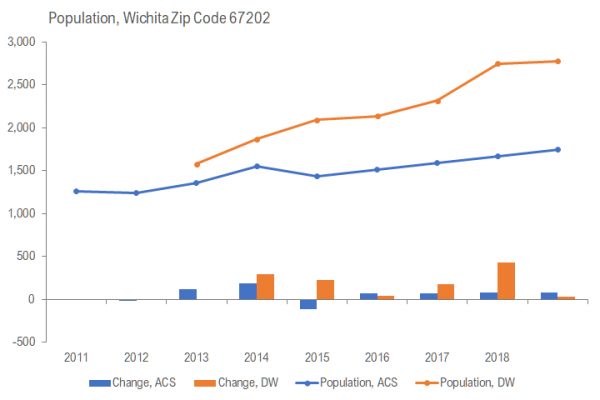 Understanding Period Estimates
Single-year and multiyear estimates from the ACS are all “period” estimates derived from a sample collected over a period of time, as opposed to “point-in-time” estimates such as those from past decennial censuses. For example, the 2000 Census “long form” sampled the resident U.S. population as of April 1, 2000.

Multiyear estimates should be labeled to indicate clearly the full period of time (e.g., “The child poverty rate in 2011–2015 was X percent.”). They do not describe any specific day, month, or year within that time period.

The primary advantage of using multiyear estimates is the increased statistical reliability of the data compared with that of single-year estimates, particularly for small geographic areas and small population subgroups. Figure 3.2 shows the improved precision of an ACS 5-year estimate, compared with a 1-year estimate, for child poverty statistics in Rice County, Minnesota—a county with about 65,000 residents in 2015. The lines above and below the point estimates represent the confidence intervals, or ranges of uncertainty, around each estimate. The confidence interval for the 1-year child poverty estimate ranges from 1.4 percent to 9.4 percent (8 percentage points) while the interval for the 5-year estimate is narrower, ranging from 12.8 percent to 19.2 percent (6 percentage points). (Refer to the section on “Understanding Error and Determining Statistical Significance” for a detailed explanation of uncertainty in ACS data.)

Deciding Which ACS Estimate to Use
For data users interested in obtaining detailed ACS data for small geographic areas (areas with fewer than 65,000 residents), ACS 5-year estimates are the only option.