What incentives can Wichita offer?

Wichita government leaders complain that Wichita can’t compete in economic development with other cities and states because the budget for incentives is too small. But when making this argument, these officials don’t include all incentives that are available.

In making the case for an economic development fund paid for by a sales tax, the argument goes like this: “Wichita and Sedgwick County compete conservatively with incentives. The City of Wichita and Sedgwick County have a total of $1.65 million in new uncommitted funds for cash incentives this year with any unused money going back to the general fund.” (Will Wichita Accelerate Competition for Primary Jobs?, presentation made to Wichita city council.)

This statement is true only if we use a very narrow definition of the word “incentive.” By any reasonable definition, Wichita has many incentives worth much more than what is claimed by Wichita economic development officials and politicians.

In fact, the report cited above contains contradictory information about the amounts that are available for economic development incentives in Wichita. Here is an example: “The $4.5 million PEAK program incentive from the Kansas Department of Commerce was an important factor in keeping NetApp in Wichita. Locally we were able to provide $836,000 in incentives.”

So with an incentives budget of $1.65 million, a Wichita company received $5.3 million in incentives. Some of that, like the PEAK incentive, is paid over a period of years. But that amount doesn’t begin to describe the benefits NetApp received.

A letter to NetApp from the Kansas Department of Commerce laid out the potential benefits from the state. As detailed in the letter, the programs with potential dollar amounts are:

The total of these is $35,160,017. Some of these benefits are paid over a period of years. The PEAK benefits are payable over seven years, according to the letter, so that’s about $1.1 million per year. These are potential benefits; the company may not actually qualify for and receive this entire amount. But it’s what the state offered.

It’s true that some of these programs are not cash incentives of the type Wichita complains of lacking. But if a company is going to make purchases, and the state says you can skip paying sales tax on the purchases — well, that’s as good as cash. $6,880,000 in the case of NetApp, according to the Kansas Department of Commerce. 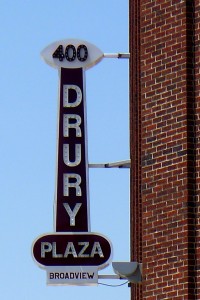 purchasing the Broadview Hotel, the city allowed the hotel to escape paying much of the taxes that the rest of us have to pay. According to city information, Drury planned to spend $22,797,750 on the hotel. If we use this as the appraised value for the property when it is complete, the annual property taxes due for this property would be $22,797,750 times .25 times 126.323 divided by 1000, or $719,970. This calculation may be rough, but it gives us an approximation of the annual operating subsidy being given to this hotel for the next ten years.

When Boeing announced in 2012 that it was closing its Wichita operations, city leaders complained that Boeing was leaving Wichita even though it had received many incentives. From 1979 to 2007, Boeing received tax abatements through the industrial revenue bond process worth $658 million, according to a compilation provided by the City of Wichita. (This is not money the city lent or gave to Boeing. IRBs provide a vehicle for granting tax abatements or exemptions.) At the time, city officials said the average amount of bonds was $120 million per year. With Wichita commercial property tax rates at 3.008 percent ($30.08 per $1,000 of appraised value), according to GWEDC, that’s a tax savings of around $3.6 million per year. To Boeing, that’s as good as receiving cash year after year.

In 2013 Wichita approved a package benefiting Exchange Place in downtown. Here’s what the city council agenda packet gives as the sources of financing for this project.

TIF, or tax increment financing, diverts future increased tax revenues away from their normal uses and diverts them back to the project. In this case, the city will borrow $12,500,000 by selling bonds. It will give this money to the developer. Then, TIF proceeds will be used to repay these bonds.

Note that the sources of financing for the Exchange Place project includes “Tax Credit Equity.” Here’s an example of another downtown project, the Ambassador Hotel, and the incentive package the city prepared:

All told, this project was slated to receive $15,407,075 in taxpayer funds to get started, with additional funds provided annually.

The tax credits for this project are historic preservation tax credits. They have the same economic impact as a cash payment. The federal tax credits are available across the country, while the Kansas tax credits, of course, are a state program. In this case the hotel developers received an upfront payment of $3.8 million from the state in a form that’s as good as cash.

Last year a STAR bonds district in northeast Wichita was approved to receive $31,570,785 from these bonds. The STAR bonds are paid off with sales tax revenue that would otherwise go to the state and overlapping jurisdictions. This is sales tax collected from the business’s customers, and doesn’t cost the business anything.

This list is not complete. There are other programs and other beneficiaries of economic development subsidies. With this in mind, it is disingenuous for city and other officials to use the $1.65 million figure as though it was all Wichita had to offer. It’s important for citizens to know that contrary to the claims of officials, Wichita has many economic development incentive programs available, and some have substantial value to the recipients, with corresponding cost to the city and other jurisdictions.