The developers of property near Naftzger Park in downtown Wichita will possibly receive millions in other subsidy.

The powerful impetus to redevelop Naftzger Park in downtown Wichita is attributed to two sources: The NCAA basketball games in March and the desire of TGC Development Group to develop property it owns near the park. 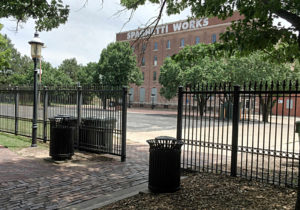 How much motivation comes from which source depends on who you ask. But it’s clear that the present state of the park is a problem for TGC. A newly redesigned park will effectively serve as the “front yard” for TGC’s projects, and will greatly benefit that company. If the park redesign is paid for with tax increment financing, or TIF, this new park comes at no cost to TGC.

But this is likely not the only benefit TGC will receive from taxpayers. The building TGC owns near Naftzger Park is commonly known as the “Spaghetti Works” building. Before that it was known as the Wichita Wholesale Grocery Company. Under that name, the property was listed on the National Register of Historic Places in 1983. 1 Then, in 2016 conditional approval was given for federal historic preservation tax credits. 2

These federal tax credits are worth 20 percent of the cost of rehabilitating historic structures. 3 These credits may be used dollar-for-dollar when paying federal income taxes, or they may be sold for cash, usually at a discount, and someone else uses them — instead of cash — to pay taxes they owe.

That’s not all. Although there is no application at this time, it’s likely that TGC will also apply for Kansas tax credits. These are like the federal credits, except they are for 25 percent of the rehabilitation costs. 4

Together these tax credits can pay up to 45 percent of the costs of rehabbing this building.

Additionally, these tax credits are inefficient. When Kansas Legislative Post Audit looked at Kansas tax credits, it found that when sold, the state receives 85 cents of project value for each dollar foregone. 5

There are many reasons why historic preservation tax credits should be eliminated. 6 7 But for now, it’s important to know that a redesigned Naftzger Park is not the only economic subsidy the nearby private property owners are likely to receive.