A transparency agenda for Wichita

Kansas has a weak open records law, and Wichita doesn’t want to follow the law, as weak as it is. But with a simple change of attitude towards open government and citizens’ right to know, Wichita could live up to the goals its leaders have set.

The City of Wichita is proud to be an open and transparent governmental agency, its officials say. Wichita Mayor Carl Brewer often speaks in favor of government transparency. For example, in his State of the City address for 2011, he listed as an important goal for the city this: “And we must provide transparency in all that we do.” When the city received an award for transparency in 2013, a city news release quoted Wichita City Manager Robert Layton: 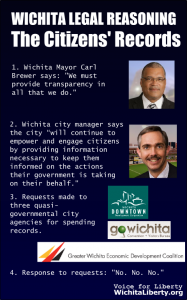 But when we look at some specific areas of government transparency, we find that the city’s efforts are deficient. Below are a few areas in which the city could improve. Much more is available here: Open government in Kansas

The Kansas Open Records Act (KORA), in KSA 45-216 (a) states: “It is declared to be the public policy of the state that public records shall be open for inspection by any person unless otherwise provided by this act, and this act shall be liberally construed and applied to promote such policy.

In reality, Kansas has a weak open records law. Wichita doesn’t want to follow the law, as weak as it is. But with a simple change of attitude towards open government and citizens’ right to know, Wichita could live up to the goals its leaders have set.

Citizen watchdogs need access to records and data. The City of Wichita, however, has created several not-for-profit organizations that are controlled by the city and largely funded by tax money. The three I am concerned with are the Wichita Downtown Development Corporation, Go Wichita Convention and Visitors Bureau, and Greater Wichita Economic Development Coalition.

I have asked each organization for checkbook-level spending data. Each has refused to comply, using the reasoning that they are not “public agencies” as defined in the Kansas Open Records Act. But consider the WDDC: In every year but one, its percent of revenue derived from taxes is well over 90 percent. In many years the only income WDDC received was from taxes and a small amount of interest earned. Click here to see how much of WDDC’s revenue comes from taxes.

The Wichita city attorney backs these organizations and their interpretation of the law. So do almost all city council members. After 14 months investigating this matter, the Sedgwick County District Attorney agreed with the city’s position. (Click here to read the determination.) The only course of action open to me as a citizen watchdog is to raise thousands of dollars to fund a lawsuit.

There is one other course of action, however. That is, these agencies and the city could fulfill the records requests that I have made. These agencies believe the law doesn’t require them to release the records, but the law does not prohibit or restrict releasing the records. They could fulfill requests if they wanted to, which goes back to the attitude of the city. For more, see Wichita, again, fails at open government.

Citizen watchdogs and others need the ability to examine the spending of tax money. When government creates quasi-governmental bodies that are almost totally funded through taxes and then refuses to disclose how that money is spent, we have to wonder why the city doesn’t want citizens to know how this money is spent.

The most important way governments can communicate with their subjects is through their websites. Wichita moved to a new website early in 2013. While the former website had its share of problems — such as a search feature that didn’t work very well — the new website has been a step backwards.

For example, it appears that for citizen review boards like the Metropolitan Area Planning Commission and Historic Preservation Board, agendas and minutes prior to 2012 did not survive the conversion to the new website. Other documents that were previously available but appear to be missing after the conversion include the daily arrest reports. It appears that only a few years of past budgets are available, but the comprehensive annual financial reports are available for about ten years back. (If I missed any documents that are actually available, I apologize. But the fact that I couldn’t find them is its own problem.)

The prior website had a service called “MyWichita.” This was a very useful service. After registration, citizens could see a list of documents and check the types of documents for which they’d like to receive notification when newly available, such as meeting agenda and minutes. This email reminder service was very valuable. It didn’t survive the conversion to the new website, and there’s nothing new to replace its function.

The search feature on the new website is better than on the old. But there is a curious twist to the new search: It gives different results depending on the starting page. This could be a potentially useful feature if users were made aware of it. For example, if the user is currently viewing the Finance Department web page and starts a search, the system could give the user a choice of search just the Finance Department, or all of the website. Presently, it appears that the search would be confined to just the Finance Department, and users could easily conclude that documents they searched for don’t exist, when in fact they do.

Most new websites in recent years will adapt so they are usable from mobile devices like smartphones. Not so with the new Wichita website.

Many governmental agencies post their checkbooks on their websites. Sedgwick County does, and also the Wichita school district. Not so the City of Wichita.

Even after asking for checkbook spending data, Wichita can supply data of only limited utility. What was supplied to me was data in pdf form, and as images, not text. It would be difficult and beyond the capability of most citizens to translate the data to useful format. Even if someone translated the reports to computer-readable format, I don’t think it would be very useful. This is a serious defect in the city’s transparency efforts.

Kansas law requires that local government agencies publish legal notices for a variety of topics. Presently these are published in the Wichita Eagle at great cost to taxpayers. These notices could also be published on the city’s website, where they could be searched and archived. This would increase the usability of these documents at very little cost to the city.

When governmental agencies like the City of Wichita fulfill records requests, they could also publish the records on their websites. Most of the time the records are supplied electronically, so this is an additional simple (and low cost) step that would leverage the value of the city’s effort.

What do lobbyists, including taxpayer-funded lobbyists, do in Topeka? One thing they do is testify before committees, in both verbal and written form. Another thing they do is to prepare reports for the clients, advising them on upcoming legislation, analyzing how it affects them, and what the prospects for the bill might be. They also meet with legislators and their clients, which are your elected officials.

I see nothing in the Kansas Open Records Act that allows local governmental units in Kansas to refuse to disclose these documents: testimony, reports by lobbyists to their government clients, and the lobbyists’ calendars (or billing records for contract lobbyists). Instead of making citizens ask for these records, possibly paying fees to obtain what they’re already paying for, why don’t local governments post these documents immediately on their websites?

If the actions taken by taxpayer-funded lobbyists are truly in the public interest, you’d think that cities, counties, and school boards would already be making this information easily available. In any case, there should be no resistance to starting this program.