Wichita to look outside for management of engagement

Wichita decides to have someone else conduct public engagement.

At the November 7, 2017 meeting of the Wichita City Council, the council will be asked to approve a request for proposal (RFP) document relating to Century II.

The RFP is a document that spells out what the city wants done relating to public engagement regarding the future of Century II. Specifically, interested parties are invited to “design and implement a transparent public engagement process that involves a broad cross-section of Wichita residents in a discussion of interests related to the future of Century II as a performing arts center.”

A “Screening and Selection Panel” selected by the Wichita city manager will evaluate the proposals based on several criteria and select a winner.

The introduction to the RFP states: “The primary purpose of this engagement is to identify the community’s interests and recommendations related to Century II as a performing arts center, to include the option of its removal and replacement, as well as its relationship to the convention center, both in function and spatial proximity.” No cost ceiling is given by the city.

Of note, the schedule in the RFP gives November 3 as the due date for proposals. But it is four days after that, on November 7, that the city council will be asked to, according to city documents, “approve the scope of services and amendment for the Request for Proposals.”

While some may criticize the city for relying on an outside consultant to conduct public engagement, the reason given is a recommendation by the city manager that the process be “be led by an independent third party to ensure neutral framing of the issues.”

That makes a lot of sense, as Wichita doesn’t have a good track record in this regard. For example, in even-numbered years the city has surveyed residents asking them to rate “the job Wichita does at welcoming citizen involvement.” The results are shown in the nearby chart created from data found in versions of the Wichita Performance Measure Report. The numbers are the percent of respondents giving “excellent” or “good” as their response to the question. 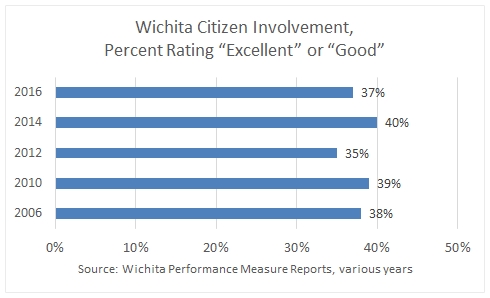 The report says this performance is “much below” a benchmark set by the National Research Center National Citizen Survey, the group that conducted the survey for the city.

There’s also the 2014 city sales tax election, where the city was proud of its engagement with citizens, convincing them of the need for the tax. On election day, 62 percent voted against the tax.

Before that there was Activate Wichita, a system for gathering citizen feedback. But when rating ideas, there was no voting option for expressing disagreement or disapproval with an idea. “Neutral” is as much dissent as Wichitans were allowed to express in this system. This system fell into disuse and became an embarrassment for the city.