We do know that Wichita Mayor Carl Brewer, as memorialized in the official meeting minutes, praised Visioneering: “Mayor Brewer stated this is one of the smartest moves that the City of Wichita has done because it was the primary catalyst that pulled the public and the private together and laid out a vision for our City.”

As shown in Wichita job growth and Visioneering peers, the benchmark data for Wichita as compared to its peer cities shows poor relative performance of the Wichita economy. That article looked at job growth, which is one of the areas Visioneering is benchmarking.

Another area Visioneering benchmarks is per capita income. The chart provided by Visioneering is difficult to read and recognize emerging trends. I’ve prepared an interactive visualization of Wichita and the peer areas that Visioneering uses. 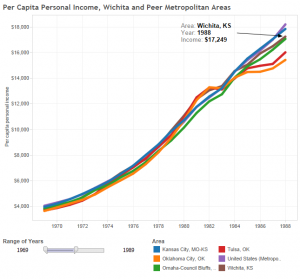 To the left is a chart of Wichita and peer personal income per capita, from 1969 to 1989. (Click for a larger version.) During this time period, Wichita compares well to the peer metropolitan areas that Visioneering uses. 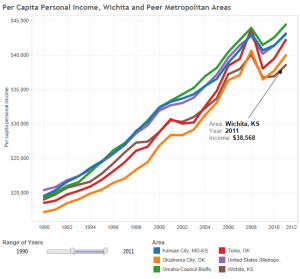 To the left is a chart of of the same data, but from 1990 to 2011. (Click for a larger version.) It’s during this stretch that Wichita starts to fall behind its peers in per capita income, until finally Wichita ranks last in this measure, as it also does in job growth.

Soon Visioneering will make a presentation to members of the Sedgwick County Commission. Perhaps commissioners will ask a few questions about these benchmarks. If I were a commissioner, I might ask these questions:

Is Visioneering satisfied with the performance of Wichita, as measured by these benchmarks?

Is Wichita’s trend in these benchmarks moving in the right direction, or is Wichita falling farther behind?

Are these the correct benchmarks we should be using?

Is it possible that Visioneering is in fact making the Wichita economy better than it would be without Visioneering?

Does Visioneering need additional resources to fulfill its mission?

On the Visioneering website, why are no future events listed? Are none planned?

On the Visioneering website, under the “News” section, is it true that there has been no news to post since August 2011 or September 2012 (there are two streams of news)?

Citizens might also wonder why no members of the Wichita City Council asked any questions like these.