Wichita’s evaluation of development team should be reconsidered 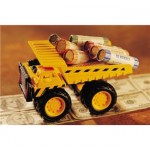 In an effort to avoid mistakes made in the past and inspire confidence in the process, parties wishing to receive economic development subsidies for projects in downtown Wichita are evaluated on a variety of measures. The evaluation matrix released for a project to be considered next week by the Wichita City Council, however, ought to be recalculated.

It’s this ownership team that ought to cause the city concern. Two of the evaluation criteria are “Past project experience with the City of Wichita” and “References, especially from other municipal partners.” This development team was awarded the maximum number of points possible for each (points being a positive measure). Here are a few things that the evaluation committee may not have considered when awarding these points.

Despite these two cost overruns on city projects, Wichita Mayor Carl Brewer wrote in a letter recommending Key Construction on a different matter: “Key is known for their consistent quality construction, budget control and on schedule delivery.” Maybe that’s what the evaluation committee relied on.

Also, two years ago Key Construction proposed — and was awarded by the city council — a no-bid contract for a parking garage. But the city later put the contract to competitive bid. Key, which first bid $6 million, later bid $4.7 million. This no-bid contract awarded to Key was cronyism in the extreme. If the desire of the majority of the city council, including Mayor Carl Brewer, had been realized, Wichita taxpayers would have sent an extra — and unnecessary — $1.3 million to a politically-connected construction company. See Campaign contributions show need for reform in Wichita for an example of how Key Construction has mastered political cronyism.

By the way, the mayor’s relationship with Wells means he should not participate in voting on this matter.

Council member Lavonta Williams was not pleased, either, according to her quotations: “‘Right now, it doesn’t look good,’ she said. ‘Are we happy about it? Absolutely not.'”

In a separate article by the Eagle on this issue, we can learn of the reaction by two other city hall officials: “Vice Mayor Jim Skelton said that having city development partners who benefit from tax increment financing appeal for lower property taxes ‘seems like an oxymoron.’ City Manager Robert Layton said that anyone has the right to appeal their taxes, but he added that ‘no doubt that defeats the purpose of the TIF.'” 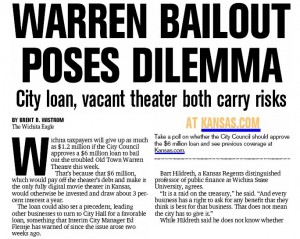 Bill Warren: In 2008 the Old Town Warren Theater was failing and its owners — Bill Warren being one — threatened to close it and leave the city with a huge loss on a TIF district formed for the theater’s benefit. Faced with this threat, the city made a no-interest and low-interest loan to the theater. Reported the Wichita Eagle: “Wichita taxpayers will give up as much as $1.2 million if the City Council approves a $6 million loan to bail out the troubled Old Town Warren Theatre this week. That’s because that $6 million, which would pay off the theater’s debt and make it the only fully digital movie theater in Kansas, would otherwise be invested and draw about 3 percent interest a year.”

Besides Warren, you may — or may not — be surprised to learn that the theater’s partners included Dave Wells and Dave Burk, the same two men mentioned above. Also, Mayor Brewer’s relationship with Warren means he should not participate in voting on this matter.

With the history of these parties working in public-private partnerships, the Wichita City Council needs to question the matrix delivered by the evaluation committee.