While the Kansas Democratic Party apologized last week for misstating candidates’ voting record on two mail pieces, the party and its candidates continue a campaign of misinformation regarding spending on Kansas public schools.

Many of the allegations are made against Kansas Governor Sam Brownback for purportedly cutting school spending. An example is on the Kansas Democratic Party Facebook page, which can be seen nearby.

As part of the party’s website, on a page titled Restore Education Funding, Kansas Democrats make this claim:

This claim is repeated on candidates’ web sites, such as this example from senatorial candidate Tim Snow, which reads: “In the last three years, conservatives in Topeka have slashed education spending by $620 per student.” 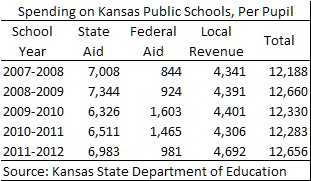 The Democrats are also considering only Kansas state spending on schools, neglecting federal and local sources of funds. In the 2008-2009 and 2009-2010 schools years, federal aid soared as a result of the Obama stimulus program. These funds almost made up for the decline in state spending, meaning that total spending on Kansas schools declined only slightly.

(You’d think that Kansas Democrats would want to remind us of the supposedly wonderful things the Obama stimulus accomplished, but evidently not when the facts are inconvenient.)

Then, who was Kansas governor during the years that Kansas state spending on schools declined? Kathleen Sebelius and Mark Parkinson. They’re Democrats, I believe.

There are more examples of Democrats misleading Kansans. Here’s Senate Minority Leader Anthony Hensley: “But Gov. Brownback is acting on the assumption that schools aren’t stretching every dollar to the last cent, even after he made the largest cut to public education in Kansas history.” (Dems seek input from parents, educators on impact of school funding cuts.) (emphasis added)

Paul Davis, the Kansas House of Representatives Minority Leader, was quoted in the Lawrence Journal-World as saying “Instead of hosting an online forum to complain about public schools, why not discuss all the innovative ways our teachers and administrators have done more with less since Gov. Brownback implemented the largest cut to education funding in Kansas history?” (emphasis added)

Hensley and Davis are two of the top Democrats in Kansas, absolutely so in the Kansas Legislature.

It’s easy to understand why Democrats focus on school spending. It’s easy to persuade parents — and anyone, for that matter — that if we want the best for Kansas schoolchildren, we need to spend more.

The school spending advocates have done a good job promoting their issue, too. On a survey, not only did Kansans underestimate school spending levels, they did so for the state portion of school funding, and again for the total of all funding sources — state, federal, and local. Kansans also thought spending had declined, when it had increased. See Kansans uninformed on school spending. Similar findings have been reported across the country.

Spending more on schools is seen as an easy way to solve a problem. But the problems facing Kansas schools will require different approaches, and the Kansas school establishment won’t consider them. For a list of reforms that are needed, but resisted, see Kansas school reform issues.

Kansas Democrats should consider themselves fortunate that our governor isn’t pressing for the reform that Democrats really hate: school choice.