As measured by the Consumer Price Index, inflation remained high in April 2022, and the rate slowed a bit.

The Consumer Price Index for All Urban Consumers (CPI-U) increased 0.3 percent in April on a seasonally adjusted basis after rising 1.2 percent in March, the U.S. Bureau of Labor Statistics reported today. Over the last 12 months, the all items index increased 8.3 percent before seasonal adjustment.

Increases in the indexes for shelter, food, airline fares, and new vehicles were the largest contributors to the seasonally adjusted all items increase. The food index rose 0.9 percent over the month as the food at home index rose 1.0 percent. The energy index declined in April after rising in recent months. The index for gasoline fell 6.1 percent over the month, offsetting increases in the indexes for natural gas and electricity.

The index for all items less food and energy rose 0.6 percent in April following a 0.3-percent advance in March. Along with indexes for shelter, airline fares, and new vehicles, the indexes for medical care, recreation, and household furnishings and operations all increased in April. The indexes for apparel, communication, and used cars and trucks all declined over the month.

The Consumer Price Index was up only 0.33% in April, or a compound annual rate of 4.1% – the slowest since last August. Yet CNBC, like others, reported that “The consumer price index accelerated 8.3% in April.” No, it accelerated at half that rate.

The nearly universal error is to describe the monthly change the way illustrated by the black line, as the year-to-year percentage change between April 2021 and April 2022. Although that number is routinely reported as “the” inflation rate for April 2022 it is a backward-looking average of increases over the past twelve months, with the largest increases happening about a year ago.

Popular though it is, the year-to-year change is a history of the past 12 months, relative to the previous 12 months (the pandemic trough of 2020). That is a lagging indicator of what happened in 2021 rather than a coincident indicator of what has been happening in 2022.

He notes the large stimulus payments last March, and concludes:

When defining inflation over 12-month spans, logic and evidence suggest it is fair and accurate (not just partisan) to blame a few percentage points of the high year-to-year inflation numbers on the overblown March 2021 pandemic payouts. And that is because the past twelve months still includes the unusually rapid burst of inflation from April to June last year. But the payouts stopped last year, so they explain little of what happened so far this year.

For the future, we need to emphasize current data — viewing each new month one at a time while understanding that the Russia-Ukraine war is indeed boosting world commodity prices, particularly energy and food. The Fed and other central banks cannot possibly do anything to quickly reduce year-to-year CPI headline inflation because most months included in that statistic are now behind us. As for this year’s supply shocks to global food and energy prices, that could best be fixed by world peace. (emphasis added)

Based on this, I have added a new chart that calculates as Reynold recommends: the monthly change expressed as a compounded annual growth rate. Click for larger versions. 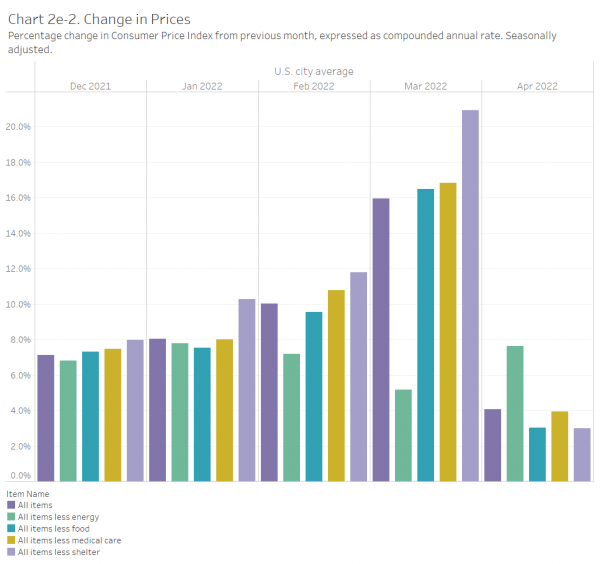 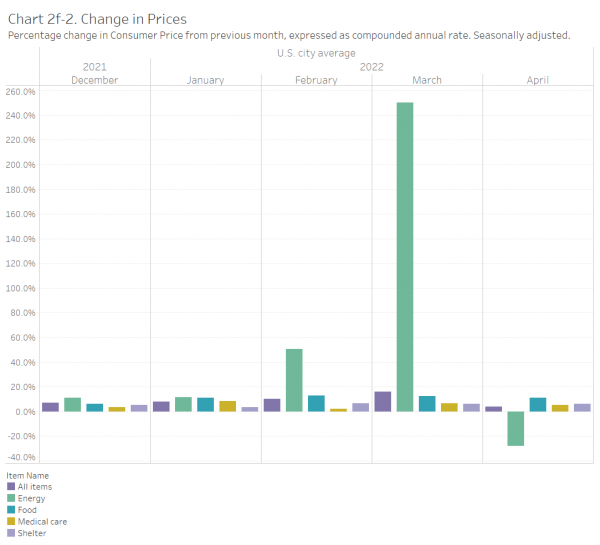 While this measure produces a lower inflation rate for this month, it produced a higher rate for March 2022: 15.9 percent instead of 8.5 percent.

Of note, inflation varies widely among products and services. The following tables hold annual price changes for items at two levels of detail. Table 2a holds broad categories, including the all items rate of 8.56 percent. Transportation had the largest increase, while medical care was much lower at 2.86 percent. Looking at Table 2b, we see the data subdivided in more detail. It’s easy to see what we know from experience: The price of motor fuel has increased by 44.02 percent over the year, which drives the rise in transportation prices. 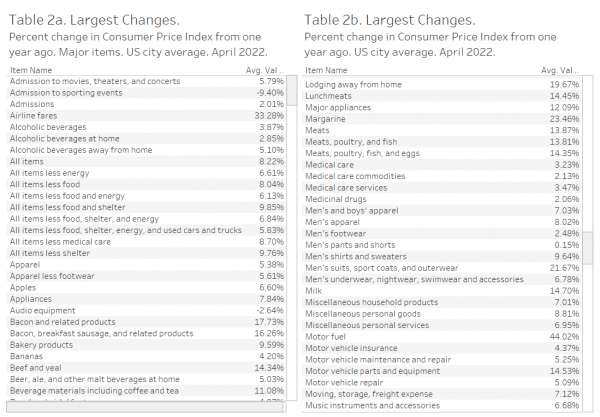 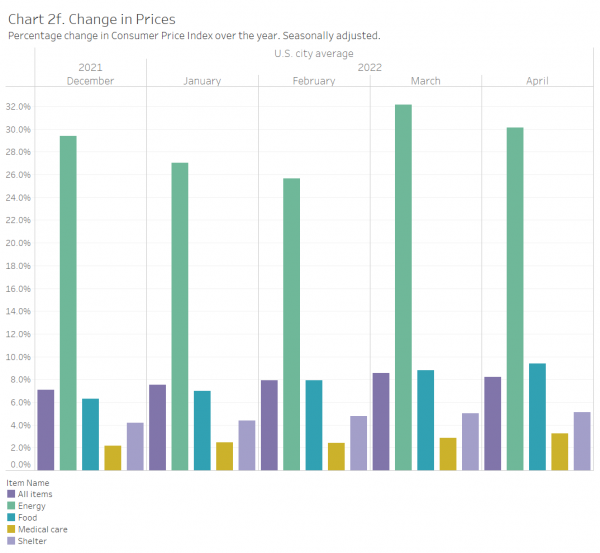 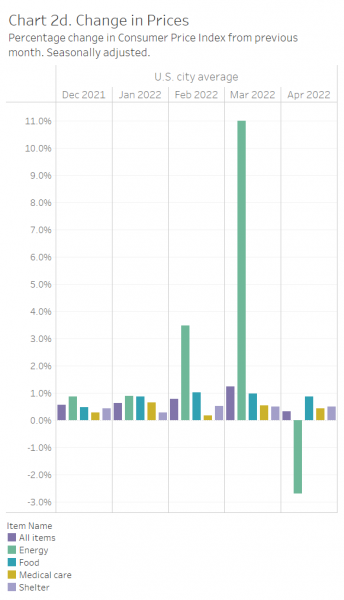 U.S. inflation edged down to an 8.3% annual rate in April but remained close to the fastest pace in four decades as the economy continued to face upward price pressures.

The Labor Department’s consumer-price index reading last month marked the first drop for inflation in eight months, down from an 8.5% annual rate in March. The decline came primarily from a slight easing in April gasoline prices, which have since reached a new high. Broadly, the report offered little evidence that inflation was cooling. See Inflation Slipped in April, but Upward Pressures Remain.

US inflation took a breather last month for the first time since August. Prices still increased, but at a slower pace than in previous months.

The Consumer Price Index was up 8.3% in the 12 months ended in April, the Bureau of Labor Statistics reported Wednesday, slightly higher than economists had predicted. It was a decrease from the 8.5% recorded in March, which had been the highest level in more than 40 years.

Stripping out more volatile product categories like food and energy, the CPI stood at 6.2% over the same period, less than the 6.5% reported in March. See US inflation slowed last month for the first time since August.