A research project by The Brookings Institution illustrates the poor performance of the Wichita-area economy.

Metro Monitor from The Brookings Institution rates metropolitan areas on a number of indicators. 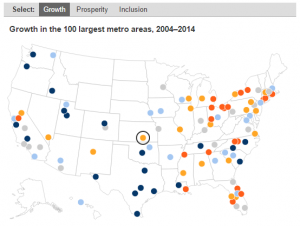 On the map of metropolitan areas, blue means faster growth, and orange means slowest. You can see that Wichita has the economic growth of a typical rust belt city. (Click charts for larger versions.) 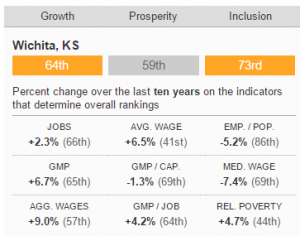 The table showing changes in indicators over the past decade shows Wichita almost always below the middle. 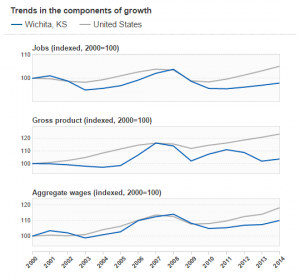 The charts of trends over time shows Wichita falling behind the nation, then catching up in 2007 and 2008, but falling behind since then. As time goes on, the gap between the nation and Wichita widens, not narrows.

These unfortunate facts about the Wichita economy are old news, if we’ve been paying attention. See, for example Employment by metropolitan area, Wichita’s growth in gross domestic product, and Wichita per capita income not moving in a good direction.

The response of Wichita political, bureaucratic, and civic leaders is, by any measure, new paint on an old barn, or just keeping pace with other cities. The Greater Wichita Partnership is just a new name for the same old collection of institutions and people who have been responsible for the dismal performance shown in Brooking’s Metro Monitor. In fact, if you visit greaterwichitapartnership.org and click on “Economic Development” you’re taken to the same old page for Greater Wichita Economic Development Coalition, although with a new logo. Same old barn; new paint.

While we have to hope that the Wichita State University Innovation Campus works as advertised, we also must realize that dozens and dozens of major and minor universities across the country already have similar initiatives up and running.