Metro Monitor for the Wichita economy

A research project by The Brookings Institution illustrates the performance of the Wichita-area economy.

Metro Monitor from The Brookings Institution rates metropolitan areas on several indicators. For this year’s report, the most recent data included is from 2015. 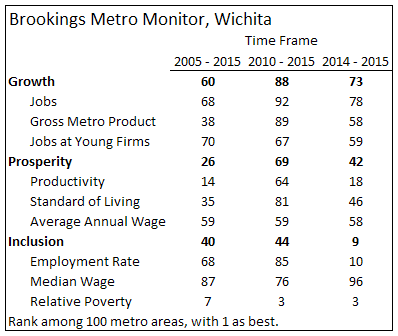 There is good news in these numbers, too. Wichita does well in most measures of “Inclusion,” which Brookings describes: “Inclusion indicators measure how the benefits of growth and prosperity in a metropolitan economy — specifically, changes in employment and income — are distributed among individuals. Inclusive growth enables more people to invest in their skills and to purchase more goods and services. Thus, inclusive growth can increase human capital and raise aggregate demand, boosting prosperity and growth.”

Brookings computed a measure called “Metro area competitive shift.” It’s described as “The difference between the actual job growth and the expected job growth. It indicates whether the metro area overperformed or underperformed given its industrial structure.” For the period 2010 to 2015, Wichita scored -4.2 percent. For 2014 to 2015, the measure is -0.5 percent. Again, movement in the right direction.

Looking at more recent data gathered from the Bureau of Labor Statistics through April 2017, we see that at a time private sector employment in the entire nation is rising steadily, in Wichita (and Kansas) employment rose at a slower rate, and has been (roughly) level since 2016.

Looking forward, the employment situation may not improve, or improve only slowly. Recently Wichita State University’s Center for Economic Growth and Business Research revised its forecast downward: “Revised employment numbers showed that Wichita’s economic growth came to a screeching halt in October of 2016. Even though employment growth presumably stopped, there is lacking evidence that the slowed employment growth is systemic. Employment growth is expected to pick up marginally, but multiple headwinds could derail that growth.” 1

Other data from BLS that I’ve charted through the Federal Reserve Bank of St. Louis show that Wichita’s unemployment rate is going down, and so is the civilian labor force. Manufacturing employment is far below previous levels, and is on a slow downward trend. You may view the Wichita dashboard here. A similar dashboard for Kansas is here.