There’s been much investment in downtown Wichita. But it isn’t evident in the assessed value of property, although the recent trend is positive.

Wichita city leaders promote public investment in downtown Wichita as wise because it will increase the tax base. City leaders cite over one billion dollars in investment in downtown Wichita over the past ten years, including projects in progress. (1)“Downtown Wichita is moving in bold new directions as envisioned in Project Downtown, our community’s master plan of development for the urban core. This year marks 10-years of implementing the plan, which has resulted in over $1 billion of investment through development projects that have been completed or announced. The success of Project Downtown is due to the robust community input that took place when it was created in 2010. Another key factor is the strategic effort to leverage public sector investment in order to maximize private sector investment. In 2019, this approach resulted in $87.5 million of private investment and $7.34 million of public investment, an 11:1 dollar ratio in the Self Supported Municipal Improvement District.” DowntownWichita.org, 2020 State of Downtown Report.

Assessed valuation is the basis for levying property tax. (2)The process starts with an appraised value, which is targeted to be fair market value for the property, or for commercial property sometimes an income-based method is used. Then, that is multiplied by 25 percent for commercial property, or by 11.5 percent for residential property. This produces the assessed value. Multiply that by the sum of the several mill levy rates that apply to the property, and you have the total property tax levy for that property. With all the new projects in downtown Wichita, we should expect the assessed value to keep pace. As someone converts an old, dilapidated property into something more valuable, appraised and assessed values should rise. As new buildings are built, new appraised and assessed value is created where before there was none (or very little). 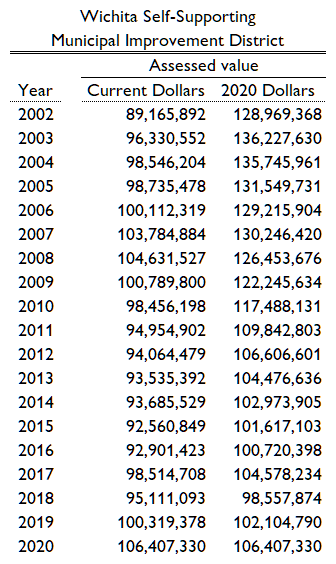 The answer is that the assessed value of property in downtown has both risen and fallen. It is at its peak since 2002, at $106.4 million. This is slightly larger than the previous peak of $104.6 million in 2008. If we cast the values as 2020 dollars to adjust for inflation, the current value is less than when the current plan for downtown was hatched in 2010. The nearby table holds the figures.

This trend is the opposite of what we’ve been promised. We’ve been told that public investment in downtown Wichita builds up the tax base. Although the trend in the past few years is positive, that positivity is an anomoly when compared to the recent past. City leaders have made similar claims about investment as assessed valuation fell. (3)“Property values continue to increase in the SSMID as new development emerges in the City center. Since 2004, private and public investment in Downtown approaches $1 Billion.” DowntownWichita.org, 2013 State of Downtown Report.

Included are two charts from the 2020 State of Downtown Report published by Downtown Wichita.org. 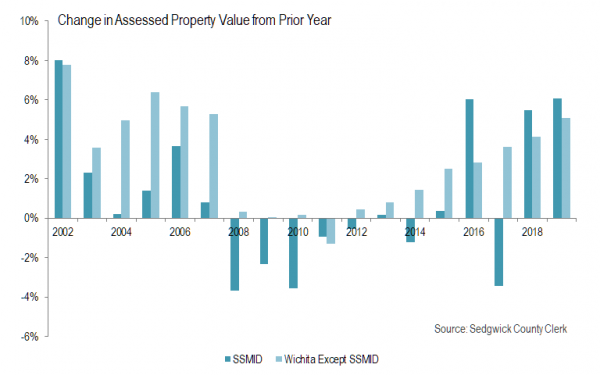 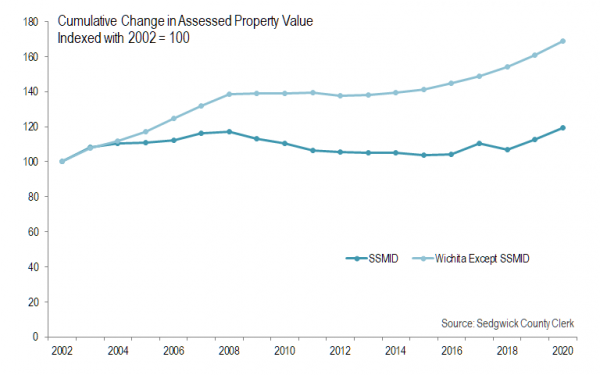 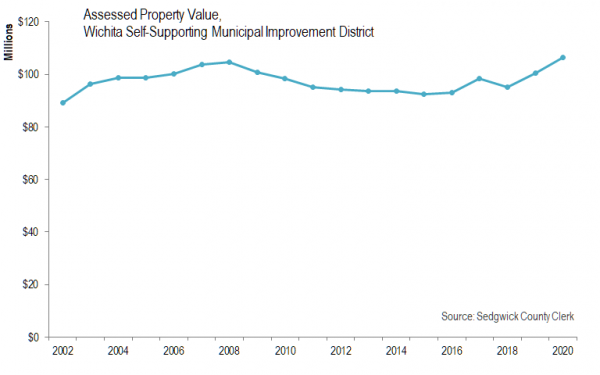 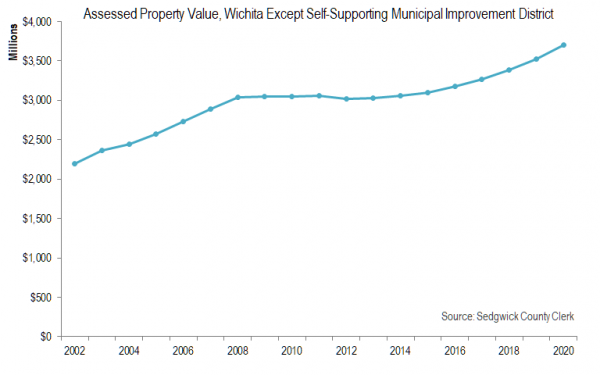