As measured by the Consumer Price Index, inflation remained high in January 2022, and the rate accelerated.

The Consumer Price Index for All Urban Consumers (CPI-U) increased 0.6 percent in January on a seasonally adjusted basis, the U.S. Bureau of Labor Statistics reported today. Over the last 12 months, the all items index increased 7.5 percent before seasonal adjustment.

Increases in the indexes for food, electricity, and shelter were the largest contributors to the seasonally adjusted all items increase. The food index rose 0.9 percent in January following a 0.5-percent increase in December. The energy index also increased 0.9 percent over the month, with an increase in the electricity index being partially offset by declines in the gasoline index and the natural gas index.

The index for all items less food and energy rose 0.6 percent in January, the same increase as in December. This was the seventh time in the last 10 months it has increased at least 0.5 percent. Along with the index for shelter, the indexes for household furnishings and operations, used cars and trucks, medical care, and apparel were among many indexes that increased over the month.

Of note, inflation varies widely among products and services. The following tables hold annual price changes for items at two levels of detail. Table 2a holds broad categories, including the all items rate of 7.5 percent. Transportation had the largest increase, while medical care was much lower at 2.5 percent. Looking at Table 2b, we see the data subdivided in final detail. It’s easy to see what we know from experience: The price of motor fuel has increased by 40 percent over the year, which drives the rise in transportation prices. 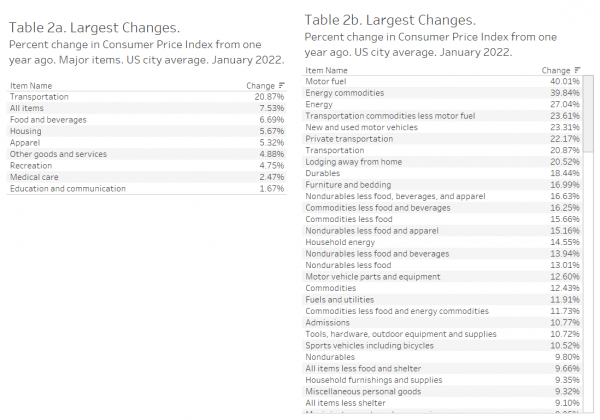 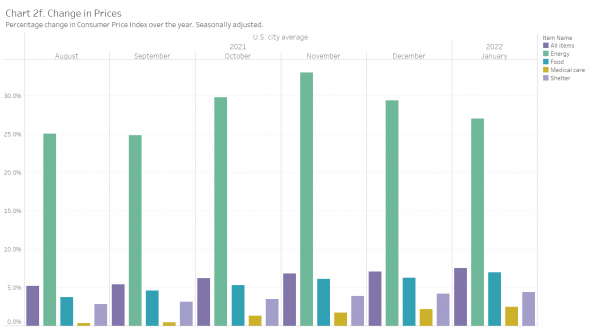 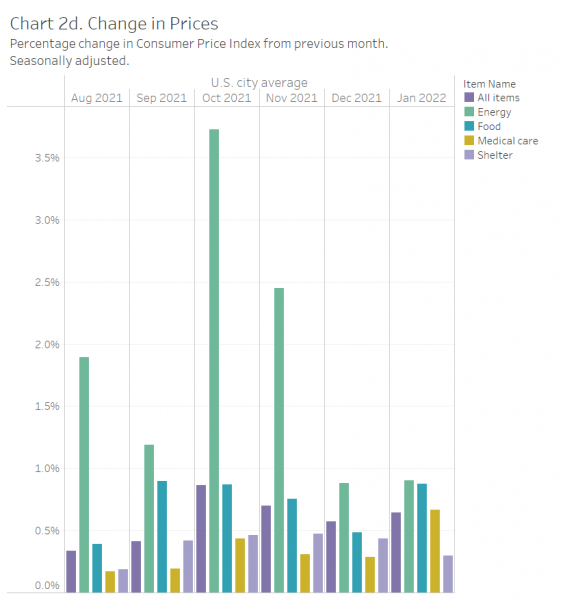 Inflation is not the same everywhere. The following chart shows the U.S. city average and the rates for large and medium Midwestern cities. 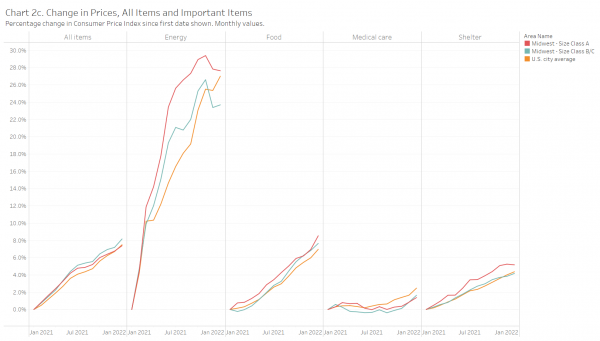 The Labor Department on Thursday said the consumer-price index—which measures what consumers pay for goods and services—in January reached its highest level since February 1982, when compared with the same month a year ago. That put inflation above December’s 7% annual rate and well above the 1.8% annual rate for inflation in 2019 ahead of the pandemic.

The so-called core price index, which excludes the often volatile categories of food and energy, climbed 6% in January from a year earlier. That was a sharper rise than December’s 5.5% increase and the highest rate in nearly 40 years. See U.S. Inflation Rate Accelerates to a 40-Year High of 7.5%.

A key measure of inflation climbed to a near-40-year high last month. Economists are hopeful that America will reach the peak of the pandemic-era price increases in the early months of 2022. Here’s to hoping.

The consumer price index rose 7.5% in the 12 months ending January, not adjusted for seasonal swings, the Bureau of Labor Statistics said Thursday. It was the steepest annual price increase since February 1982 and worse than economists had forecast.

Stripping out food and energy prices, which tend to be more volatile, prices increased by 6% between January 2021 and January 2022, marking the largest increase since August 1982. Food prices rose 7% over the same period, while energy prices rose 27%, led by fuel oil and gasoline prices.

In January alone, prices rose 0.6%, including seasonal adjustments, the same rate as in December and more than economists had predicted. That served up some bad news for people who hoped the monthly data would indicate a slowdown of the price hikes. See America’s annual price increase was worse than economists had forecast.